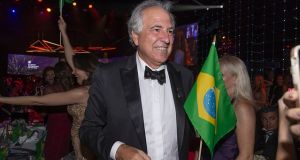 Rubin Menin’s victory was announced at a gala ceremony held in the Salle des Étoiles in Monaco on Saturday.

Rubens Menin, the largest residential real estate developer in Latin America, has been named EY World Entrepreneur of the Year for 2018.

The Brazilian was selected from 56 finalists from 46 countries.

Mr Menin’s victory was announced at a gala ceremony held in the Salle des Étoiles in Monaco on Saturday.

Mr Menin is chairman of property developer MRV Engenharia, a company he founded in 1979 with his two brothers when he was just 21.

The company has built more than 300,000 properties in total and it employs more than 24,000 people. It is the leading builder of low-income housing in Brazil with one in every 200 Brazilians living in a home built by the group.

“It’s not enough to be profitable for shareholders and to give jobs, although this is important,” said Mr Menin. “A company that does not have purpose is not sustainable.”

Mr Menin was the first winner of the competition to come from South America.

‘It is important for my country, and especially for the people in Brazil, that we get this recognition,” he said.

The 56 finalists in this year’s EY World Entrepreneur of the Year Awards have combined revenues of $23 billion (€19.8 billion) and have experienced average growth of 32 per cent over the last three years.

The EY Entrepreneur network, which has been active for more than 30 years, has programmes in more than 50 countries and 145 cities worldwide