Period house on 28 acres beside Phoenix Park sells for €6.65m 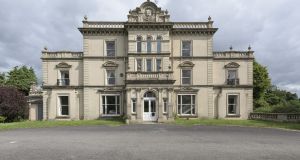 Ashton House: The Italianate-style mansion was built in the 1880s and later remodelled in a Palladian style.

A classical period house on almost 28 acres opposite Ashtown railway station in west Dublin, sold shortly before the property crash for €26 million, has changed hands again for a mere €6.65 million.

Ashton House and Estate was acquired in 2006 by the late Liam Maye, a founding director and shareholder in Castlethorn Construction, which developed the Dundrum Town Centre. He died suddenly in May 2006.

The latest purchaser is Maye’s former colleague in Castlethorn, Joe O’Reilly, whose company Chartered Land is currently developing Dublin’s most expensive new homes in Ballsbridge along with a top-of-the-market hotel, restaurants and shops.

Mr O’Reilly outbid several other interested parties, some of them banking on the possibility that part the 28-acre estate might eventually be rezoned for housing. To date, none of the land has been rezoned.

The land is located across the Navan Road from the old entrance to the former Phoenix Park racecourse.

Mr O’Reilly is familiar with the area around the Ashtown railway station, having led Castlethorn’s development of a large number of apartments and a range of top-class shopping facilities on an adjoining site at the rear of the Halfway House bar and restaurant.

The main house is a Victorian Italianate gem consisting of a three-storey main block with two-storey wings. Both the main block and the wings have balustraded roof parapets.

The house has an overall floor area of about 600sq m (6,458sq ft), including 12 large bedrooms, a spacious diningroom, ballroom, kitchen and store rooms. It was built in the late 1880s and remodelled later in a Palladian style to match the Archbishop’s House in Drumcondra.

When Ashton House first went for sale it was described by the selling agent as being in “reasonable condition”, having retained most of its period features including decorative ceiling and coving, fireplaces and stained glass windows.

The house was sold in 2006 by the Stone family. Previous owners included the Moore, Alexander and Neyland families.