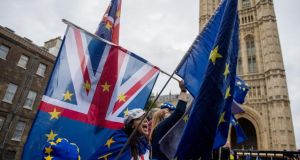 Many a headline in recent days has proclaimed the arrival of soft Brexit. That’s because the semantic game at the heart of Brexit is now focused on the meaning of the word “meaningful”. British prime minister Theresa May has promised a “meaningful parliamentary vote” on the deal that she reaches with Brussels. This, apparently, all but assures that hard Brexit is off the table. This looks dangerously complacent.

According to the Brexiteers, she didn’t make any such promise. Or at least one with any meaning. In any event, Jacob Rees-Mogg was quick out of the blocks to argue that the meaningful promise makes a hard Brexit more, not less, likely. We await further meaningful details from the UK government over the next while.

Contradictory promises to everyone in the audience is now the order of the day in Westminster. May makes mutually exclusive commitments solely to give the can another kick.

Last week’s sound and fury didn’t manage to change the rules of logic: the Irish Border and everyone’s commitment to its absence requires either Northern Ireland to effectively remain in the European Union or the whole of the UK to stay aligned with most or all of the single market. This simple truth got somewhat lost: the audience is easily distracted. Both the main UK political parties are in a race downwards into a seemingly bottomless political pit.

The only way the Border question doesn’t dictate one of these two outcomes is if somebody blinks. The least likely to fold at the negotiating table is the Irish Government. What about the EU or the British? If the North is ring-fenced inside the EU, May loses the DUP and probably her job.

In an interesting take on how the DUP might be persuaded to see things differently, if not blink, UCD’s Karl Whelan this week pointed out that the UK government’s proposals actually mean moving the Border to the North’s ports (there are far fewer of them than border crossings). At those ports a customs red and green channel system would operate, giving rise to the possibility that Northern Irish firms would be given the massive economic opportunity of being both fully inside the UK and the single market. That idea is worth watching.

Perhaps the EU backs down and allows single-market access or membership while permitting the end of free movement. If there is any capacity left to fudge even more, this is where to look.

There are plenty of routes whereby the British could have slowed immigration from the EU. That they never availed of them is a mystery. Perhaps they will now start, calling it “an end to free movement”. The EU will, by contrast, just observe the new application of old rules and be happy that the four freedoms of the single market are still being honoured.

In this scenario, the hard Brexiteers have to accept Britain staying aligned with the single market. The bone that is tossed to them is a sort-of end to free movement. Will that be enough for them? I can’t see the EU agreeing to anything that is called the end of free movement. If that opinion is wrong, the Brexiteers are unlikely to be satisfied with a solution that still involves ongoing British payments into the EU budget and the jurisdiction of the European Court of Justice.

These contortions belong in a circus, not serious negotiations. But, given how little time is left, something is going to happen either to move the deadline or to introduce yet another fudge. Or maybe both.

I don’t see how any of this is reconcilable before next March. Or, indeed, for many years to come. If the past is any guide to the future we will approach next year’s hard deadline with nothing at all being agreed. With no agreement – withdrawal or otherwise – the UK simply leaves the EU in 2019 without so much as a standstill arrangement. The hard Brexiteers are no longer concealing this as their key, or only, objective. That this outcome is catastrophic for all concerned, not least Ireland, goes without saying.

Logic dictates that if the consensus view is correct – soft Brexit is assured – the hardliners have to be seen off. That looks unlikely. They are just running the clock down. All they have to do is to block – anything and everything – for another 9½ months.

By contrast, May has to keep spinning plates: promising one thing to the hardliners, the opposite to her rebels. She has to keep this up while negotiating a deal that delivers, at least, the two-year transition period, following March 2019. A few analysts are quietly betting that transition may become permanent. That’s the soft-Brexit wager. Expect the ultras to pull out all the stops to prevent precisely this outcome.

Which brings us back to the meaning of meaningful. The absence of a written constitution alongside empty – not meaningful – government promises suggests trouble ahead. The French venerate their philosophers, giving state funerals to those who pondered the meaning of life. Jean-Paul Sartre summed up his view of his world with a book called Nausea. I know how he felt.