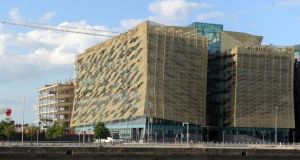 The Central Bank has secured planning permission for a new “monumental” €300,000 outdoor sculpture for a public space outside its €140 million Dublin HQ.

Architects of the Central Bank, Henry J Lyons told Dublin City Council that the Rothschild work is the “creation of a outdoor sculpture on a truly monumental scale, in a permanent location where a really strong and lasting engagement with the public is possible”.

The sculpture takes the form of a multi-directional arch rising to 10.5 metres and swooping over the centre of the plaza, spanning a distance of 14 metres before touching down lightly on the ground at eight different points.

Henry J Lyons state that the plaza space to the north of the Central Bank building “is a threshold location with people constantly passing through”.

The proposed site for the sculpture is located on the east west pedestrian route between New Wapping Street and Castleforbes Road to the north east of the Central Bank Building.

The Council granted planning permission after its own Public Art Officer, Ruairí­ Ó Cuiv said that he believed that “the sculpture will greatly enhance the public realm in the area”.

The Council planner in the case found that the siting of the sculpture “will provide a focal point and add to the visual attractiveness at the location”.

The Central Bank has published a note that it has awarded a €300,000 contract to Ms Rothschild’s London based Peacegarden Ltd for the sculpture.

A spokesman for the Central Bank said that the €300,000 figure published is an estimated cost as there will be Sterling and Euro elements and that the actual cost is not definite.

He said that the project is still at design stage and no construction work has yet commenced but it is expected that the sculpture will be in situ in 2020.

He said that in line with planning requirements for the Central Bank building, the Central Bank of Ireland agreed with Dublin City Council to commission an artwork for the public space directly outside the campus on North Wall Quay.