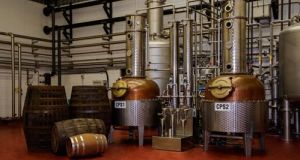 The founders of Irish whiskey and gin producer West Cork Distillers are buying out the majority stake in the business held by the UK-based Halewood group for about €18 million.

The distillery, whose brands include a gin sold under the name of BBC star Graham Norton, has also secured capital from investment funds backed by the State, including €15 million from the Ireland Strategic Investment Fund (ISIF), for an expansion of the business. Jobs numbers at its Skibbereen base are set to grow by about 26 to more than 100.

Filings from West Cork Distillers show that Halewood is being bought out as part of a complex series of transactions.

The UK group’s shares are to be redeemed for €18 million. This will leave the distiller’s founders, former fishermen Denis McCarthy and Ger McCarthy and scientist John O’Connell, as majority shareholders, Mr O’Connell confirmed.

The total cost of the buyout and the planned subsequent expansion appear to be financed by a combination of fresh equity, debt financing and the restructuring of the balance sheet of West Cork Distillers to free up some of its reserves.

The company, which made a profit of €4 million in 2017 on sales of almost €20 million, plans to free up €20 million through a capital reduction. A further €6 million will be freed up by a restructuring of the balance sheet of a related company, Skibbereen Distilleries Holdings.

ISIF confirmed it will make an equity investment in the distillery to help finance its future expansion. The documents suggest that the buyout of Hale’s stake was a condition of the Irish taxpayer-backed investment.

Separately, the ISIF-backed Irish Whiskey Growth Fund has also agreed to lend to the West Cork Distillery to fund its international rollout. This was not directly related to the Halewood deal.

Mr O’Connell confirmed that Halewood will retain ownership of the Pogues whiskey brand, which West Cork Distillers had produced. It also makes gin under the name of Graham Norton, the Cork-born BBC presenter.

He said the decision to buy out Halewood came because the UK company had, at one stage, put itself up for sale following the death of its founder. It is now off the market, but Mr O’Connell said West Cork Distillers did not want to leave its future “in the hands of someone else”.

“It has been a long, hard road to get to this point,” he said. “But now we are looking to expand the distillery and to expand abroad too.”

“We are delighted to back a business that successfully combines innovation, quality and premium brands and demonstrates the ability of Irish businesses in regional locations to build on their unique strengths to succeed internationally,” said Fergal McAleavey, senior investment director of ISIF.