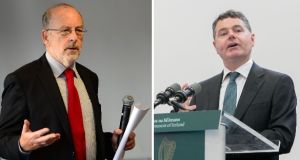 Minster for Finance Paschal Donohoe said he is taking seriously a warning that billions of euro pouring into the public purse from corporation tax could end abruptly like a “supernova explosion”.

Days after latest exchequer figures show another record tax take expected this year on the back of corporation tax, former Central Bank governor Patrick Honohan said the Government should not be relying on it.

“This is not really a sustainable system,” he told RTÉ Radio’s The Business on Saturday morning. “It has generated huge tax revenues in the last few years. It might be like the end of one of these stars that has a supernova explosion towards the end of its life.”

Mr Honohan said he felt like “the little boy with the finger in the dike” cautioning that the flood of corporation tax receipts would not last.

Asked by presenter Richard Curran if it might “just fall off a cliff one year”, Mr Honohan replied: “Yes, I think so.”

Mr Donohoe said he acknowledged “that it is a risk”. And it is one of the reasons current spending has increased “at a lower rate than we were in pre-crisis periods, to try to deal with that kind of vulnerability”.

Asked if he took the warning seriously, he told RTÉ Radio’s This Week: “Yes, I do. This is the very reason why in recent budgets we made the change in the VAT rate for the hospitality and service sector – we increased that to widen our tax base.

“It is also the reason why we have made decisions in relation to stamp duty and commercial property, to broaden our tax base, to try to get to a point where we are less reliant on corporation tax in the future.”

Exchequer returns for the eight months to the end of August this year, published during the week, show corporation tax has generated a record €4.9 billion so far this year.

This was €314 million or 6.8 per cent ahead of the Department of Finance’s projections. It was also more than half a billion euro up on last year.

Mr Honohan said he didn’t think the collapse in corporation tax was going to happen next year. But he warned it can happen suddenly and unexpectedly, adding that no one predicted the “huge explosion of tax revenue” in 2015.

Corporation tax receipts have more than doubled since then. This has happened amid a huge transfer of multinational assets to Ireland following a global clampdown on tax avoidance and increased corporate profitability generally.

About 40 per cent of it comes from just a handful of firms, thought to include tech giants Apple, Microsoft, Dell, Google and Oracle.

However the State’s independent spending watchdog, the Irish Fiscal Advisory Council, has criticised the Government for using the windfall to plug holes in the health budget.

Mr Honohan also predicted that the economic aftermath from Brexit will be between one-quarter and one-sixth the size of the post-Celtic Tiger crash, when measured as a drop in job losses and GDP.

It will be “bad”, he said, “but not on the scale” of the last big recession. “At worst it will between a quarter and a sixth of what we experienced that last time,” he added.

But he predicted “it won’t be distributed right across the country. It will be concentrated in different places, in different firms particularly affected.”

Taoiseach Leo Varadkar moved to reassure the public on Friday about the implications of a no-deal Brexit, saying it would not lead to a recession nor to the return of austerity.

Mr Varadkar said the economy would slow down but not as dramatically as had been portrayed this week. Speaking in Lismore, Co Waterford, Mr Varadkar did acknowledge there would be tariffs from November 1st, as well as checks near the Border, if a disorderly UK withdrawal materialised.

“Our projections are the economy will slow down but we won’t go into recession. While there will be an increase in unemployment and jobs will be lost, more jobs . . . will be created. So there will be net growth in employment,” he said.