‘For clucks sake’: Boris Johnson penned in by parliament

Business Week: also in the news was the banks; exchequer figures, and corporates 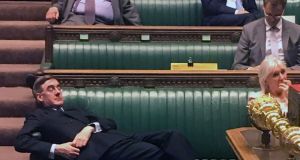 Observers of the goings on in the House of Commons this week will have been transfixed – mouths agape – at the spectacle playing out before them.

It really had it all. House leader Jacob Rees-Mogg sprawled across the famous emerald green benches with his eyes closed; Labour leader Jeremy Corbyn called a “chlorinated chicken” by the prime minister; and a new government that cannot seem to pass a vote.

It all began as it would go on: with a sense of pantomime. UK prime minister Boris Johnson lost his working majority in mid-speech as former Tory minister Phillip Lee crossed the floor of the house to join the Liberal Democrats.

Hours later, MPs delivered a blow to Johnson’s plans, voting to block a no-deal Brexit. A furious Johnson retaliated by removing the whip from 21 rebels who voted against him, including former chancellor Philip Hammond, and the grandson of former party leader Winston Churchill.

While none of the purged rebels will be permitted to stand for the party in the next election, it was only going to get worse for Johnson as Labour abstentions denied him the two-thirds majority he needed in the house to call one.

Johnson, growing exasperated, called Corbyn a “great big girl’s blouse” as well as a “gigantic chlorinated chicken” for balking at an election. The pro-Brexit Sun newspaper got in on the act. “Corbyn clucks up Brexit,” it said on its front page.

Then came Johnson’s worst nightmare. MPs passed a Bill obliging him to go to Brussels to seek a three-month delay to Brexit if he fails to secure a withdrawal deal by October 19th.

That Bill has gone to the House of Lords, where pro-government peers have tabled dozens of amendments in the hope of delaying its passage until after parliament is suspended next week.

Later, Johnson floated a return to the Northern Ireland-only backstop as a means to break the impasse. He said there could be regulatory alignment throughout the island for sectors other than agri-food, but that the UK must have “democratic control” over it.

There was also open acknowledgement from Dublin that there will have to be some checks on goods and live animals entering the Republic “near the Border” in the event of a no-deal Brexit.

Taoiseach Leo Varadkar – perhaps heeding recent calls to “front up” about the ramifications of no-deal – pulled no punches at the annual dinner of the British-Irish Chamber of Commerce in Dublin.

There will still be food on shelves but perhaps not all of the same brands, he said. Flights, trains and buses will continue to operate normally for a period but “an agreement will be needed for this to continue permanently”.

Brexit has already had a significant impact on Irish exporters, with one in 10 saying it has cost them more than €100,000, with almost 5 per cent putting the cost at more than €250,000 to date.

Meanwhile, the European Commission called for the release of nearly €600 million from an emergency fund for storms and earthquakes as it declares Brexit could be a “disaster”.

Our new Central Bank of Ireland governor Gabriel Makhlouf had his first day of work this week and told staff he will be in “listening mode” over the coming months.

“The context in which we are operating is challenging,” he told staff in an email on Monday. Some of the issues he highlighted were Brexit, the framework for consumer protection, and the need to strengthen the resilience of the financial sector.

Days later, Minister of State at the Department of Finance Michael D’Arcy indicated the Government will resist pressure to lift pay restrictions across bailed-out banks, even as industry chiefs and regulators have warned of challenges hiring and retaining key staff.

Over at Bank of Ireland, the planned sale of €300 million of junior bonds was pulled due to disappointment in the level of demand for the debt, with potential investors likely to have been rattled by speculation over Brexit.

Meanwhile, the Government is on course for another record tax take this year thanks to the ongoing windfall in corporation tax.

The latest exchequer returns for the eight months to the end of August show the business tax has generated a record €4.9 billion so far this year, which was €314 million or 6.8 per cent ahead of the Department of Finance projections.

Elsewhere, the State’s jobless rate fell to 5.2 per cent last month. The figures showed the seasonally adjusted number of people classified as unemployed was 126,000 in August, down 1,800 on the previous month.

There were mixed fortunes for some of the Republic’s biggest corporate this week, as Dalata grew profits by 19 per cent, but revenues at Eir continued to slide.

Dalata, the biggest hotel group in the State, said it expects record revenue across a number of its hotels in September.

Profit before tax increased to €42.2 million in the first six months of the year on revenues of €201.9 million, which were up 12 per cent compared to the same period in 2018 but slightly behind analyst forecasts.

Over at Eir, revenue dipped 2 per cent to €1.24 billion in the year, although a successful cost-cutting programme helped earnings grow in line with expectation. The telco said earnings of €578 million were up 10 per cent compared to last year.

Elsewhere, shares in convenience foods group Greencore jumped 8 per cent after it emerged that New York activist hedge fund, Coltrane Asset Management, had built up a stake of more than 3 per cent through financial derivatives.

In the DIY world, there was a rebrand for Grafton Merchanting ROI with the company now known as Chadwicks Group. It is converting the names on many of its stores as part of a €5 million investment programme.

Finally, Jysk, a Danish furniture retailer that plans to open up to 40 Irish stores, said its expansion plans here are being hampered because it takes it four times longer to open a new store in the Republic than elsewhere in Europe.