Cantillon: Why not let players claim some tax breaks on salaries earned outside the game? 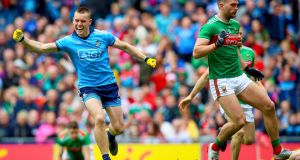 It seems odd to argue the case for any form of tax relief for GAA intercounty amateurs in a weekend when the Dublin machine may achieve five-in-a-row All-Ireland football titles. There are thousands of professional clubs around the world that lack the support network and training facilities available to these elite athletes.

Yet it should be remembered that despite Dublin’s dominance, intercounty football only succeeds on its competitive merits. And so it needs a stronger cohort of teams competing.

There is little question that the GAA feeds into the local communities, socially, but also economically. For all the criticism of the Super 8s, many provincial towns received an economic boost from the travelling crowds.

One issue that was recently raised, by Mayo defender Chris Barrett, was the increasing commitment levels required of intercounty players juggling full-time jobs and football careers.

An incentive perhaps worth considering is a form of tax relief, similar to that offered other sportspeople. Under the Revenue’s sportsperson tax-relief scheme, upon retiring from participating, a person can take their 10 best years of earnings and garner 40 per cent relief on the professional earnings from their sport. It’s available to everyone from rugby and tennis players, to jockeys and racing drivers. As amateurs, GAA players don’t qualify.

But something similar could be done for them. For example, they could be allowed to claim some tax relief on the salaries they earn outside the game during a set number of years of their intercounty career.

It would encourage footballers to better themselves in their chosen career path, while at the same time it would offer an incentive to footballers to stick with the game rather than give up saying “well it’s just taking too much of my time”. That’s arguably not an issue with the big football counties like Dublin or Kerry, but it could certainly help lure players onto the panels of all the other struggling county teams. Something to mull over, whoever wins Sam this weekend.