Industry chiefs warn of difficulty when it comes to hiring staff 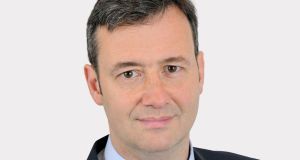 Minister of State at the Department of Finance Michael D’Arcy. When asked if the Government will ease pay caps as it considers a report by consultants Korn Ferry, the Minister said: “I’m of the view the decision’s made.”

Minister of State at the Department of Finance Michael D’Arcy has indicated the Government will stand firm on pay restrictions across bailed-out banks, even as industry chiefs and regulators have warned of challenges hiring and retaining key staff amid mounting competition from firms setting up in Dublin due to Brexit and technology companies.

“I’ve always been of the view that the bankers in those institutions are well paid,” Mr D’Arcy said in an interview in Hong Kong with Bloomberg TV on Monday, noting that the €500,000 pay cap for top executives was a the “very, very top percentile of anybody earning in Ireland”.

When asked if the Government will ease pay caps as it considers a report by consultants Korn Ferry, Mr D’Arcy said: “I’m of the view the decision’s made.”

Minister for Finance Paschal Donohoe hired Korn Ferry last October to review the pay limits and an outright ban on bonuses across the three taxpayer-rescued lenders, AIB, Bank of Ireland and Permanent TSB. While Mr Donohoe received the final report in mid-June, which is said to call for an easing of the restrictions, he has yet to bring it to Cabinet.

It is believed that the report has focused in particular on performance-related pay for mid-ranking employees in key roles.

The removal of an 89 per cent prohibitive tax charge on bonuses would be very difficult to push through politically, especially as the industry continues to grapple with the tracker-mortgage scandal and the current minority Government faces a likely general election next year.

“Minister Donohoe is currently considering the Korn Ferry report and is discussing the findings with department officials,” a spokesman for the department said. “ The Minister will engage further with his Cabinet colleagues on the matter in due course.”

AIB chief executive Colin Hunt told reporters at the end of July as he unveiled interim results of the bank that the effective ban on bonuses was having a greater impact on his ability to hold on to staff than the €500,000 executive pay limit introduced a decade ago.

“The pay cap impacts a tiny number of people,” said Mr Hunt, who became group chief executive in March, having previously led AIB’s wholesale and institutional banking division. “The big issue is the fact that we have an effective ban on variable pay. That affects far, far more people and our competitors don’t have that.”

The Central Bank advised Mr Donohoe in May that banks face the risk of losing staff in critical areas or with specialist skills in the areas of IT, risk, compliance and related functions to firms that are not the subject of remuneration restrictions.