Profits at iconic Dublin music pub, where The Dubliners played, increase 52% in 2018 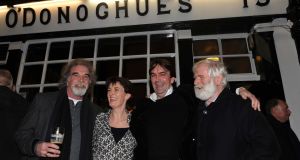 Patsy Watchorn from The Dubliners, Cliodhna Dunne, Phelim Drew and John Sheahan from The Dubliners at O’Donoghue’s pub in November 2008 for the launch of the Ronnie Drew posthumous CD The Last Session: A Fond Farewell. Photograph: Aidan Crawley

Profits at one of the State’s most storied pubs, O’Donoghue’s on Merrion Row in Dublin, increased by 52 per cent last year to €521,152.

The pub is owned and operated by the Barden family, and Carol Barden said on Tuesday: “We were very happy with last year’s trading in a very competitive market.

“We are very lucky to have a great, hardworking team and a customer base that is a mix of local and visitors.”

Numbers employed at the company last year remained static at 18.

The pub has long been associated with traditional Irish music and The Dubliners in particular, who began to play at the pub in the 1960s.

The premises was built in 1789 and began operating as a full-time pub in 1934 when Maureen and Paddy O’Donoghue began running the bar.

Oliver Barden purchased the pub in 1988.

The profits take account of non-cash depreciation costs of €210,882.

1 Should my mam wait for house prices to drop before buying?
2 Pilita Clark: Why we’re about to learn if we are really in the A-team
3 Chris Johns: Past is another country when it comes to our post-pandemic future
4 Irish whiskey sales near milestone of 12m cases a year
5 ‘I’m so lucky to be in the Caribbean – a million miles from Derry Girls’
6 Military-style planning can help businesses battle Covid-19 survival threat
7 ‘I have a talent for justifying purchases’
8 Citigroup warns that markets are out of step with reality
9 US ‘hard seltzer’ drink White Claw launches in Ireland
10 Hard-hit SMEs get ‘paltry’ €11m worth of loans under State scheme
Real news has value SUBSCRIBE