Big players have launched dozens of low- and non-alcoholic beers 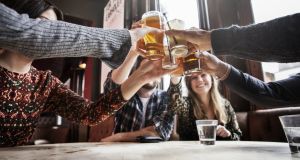 While beer purists may recoil, more people are opting for low- and no-alcohol brews, and Europeans in particular have taken to the stuff. Photograph: Getty Images

Beer drinking is so ingrained in British (and Irish) life that any mention of choosing non-alcoholic versions of the stuff provokes ire. What is the point of drinking beer without booze in it, the sceptics ask, while others rail against the supposedly bad taste.

Yet when Anna Brown, a 26-year-old consultant living in London, goes to the pub with colleagues, her drink of choice is a non-alcoholic lager called St Peter’s Without. “I still get to take part in the fun without compromising on things that are important to me,” she said, referring to her desire to avoid hangovers and cut back on calories.

While beer purists may recoil, more people are opting for low- and no-alcohol brews, and Europeans in particular have taken to the stuff.

Alcohol consumption is on the decline in many western countries as people seek healthier lifestyles and all things “wellness” remain firmly in fashion. In the UK, nearly a quarter of 16- to 24-year-olds say they do not drink alcohol, up from 19 per cent in 2005, and the increase is even greater among 25- to 44-year-olds, according to the Office for National Statistics. In the US, alcohol sales by volume have been falling since 2016.

Spotting a growth opportunity in an otherwise mature market, the world’s biggest brewers Anheuser-Busch InBev and Heineken have launched dozens of low- and non-alcoholic beers in the past three years. They are creating new versions of their biggest brands, such as Becks Blue and Heineken 0.0, and throwing marketing muscle behind them.

Smaller craft brewers are also getting into the game: Scotland’s BrewDog has had success with its aptly named low-alcohol Nanny State pale ale, while UK newcomer Big Drop Brewing Co has a popular stout with only 0.5 per cent alcohol.

Supermarkets in Paris and Amsterdam now have entire shelves devoted to non-alcoholic beers, which typically have less than 0.5 per cent alcohol by volume (ABV), and their low-alcohol cousins, which have under 3.5 per cent ABV. In the UK, Ocado and Tesco sell roughly 20 types for sale online.

Sales volumes of low and non-alcoholic beer have risen nearly 18 per cent in the past five years in western Europe, according to Euromonitor, and are forecast to climb another 12 per cent through 2022. Growth has been even stronger in the UK.

Companies are betting that non-alcoholic brews will not only lure new customers, but also retain beer drinkers who are simply consuming less. Another attraction of non-alcoholic beers is that they have one-third to half the calories of traditional brews.

There is an extra bonus for brewers. Non-alcoholic beers tend to be more profitable, because in many countries beer is subject to taxes that are built into the retail price, so removing or reducing the alcohol means less duty is owed, thus improving margins.

Yet many consumers remain sceptical. Although non-alcoholic beers have existed for decades, surveys showed that people thought they tasted quite bad, and were merely a default option for those who could not drink the real stuff, such as pregnant women or drivers.

To overcome the negative perceptions, both Heineken and AB InBev gave their master brewers a similar mission: find a way to make a non-alcoholic beer that tastes as good as the original.

David De Schutter, AB InBev’s head of innovation in Europe, was initially doubtful it could be done. “You have to turn your brewing process upside down and think of it all from all angles,” he said. “Normal beer has over one thousand aroma components, which gives it a complex taste and feeling in your mouth.”

The typical beer brewing process relies on four ingredients - malt barley, hops, yeast and water - that can be combined in myriad ways to create vastly different beers. The yeast feeds on the grains and, via fermentation, produces alcohol. To make non-alcoholic beer, you either have to stop or slow the fermentation process, or remove the alcohol after it is formed, usually by heating it because alcohol has a lower boiling point than the rest of the beer. Both approaches can render the beer either too sweet, too acidic, or not bubbly enough.

It took Heineken nearly a year before it had a zero alcohol version of its eponymous beer that it was ready to launch. Ilaria Lodigiani, Heineken’s global director for its low- and no-alcohol division, said the next challenge was convincing people to drink it.

The Dutch brewer’s strategy was simple but bold: build huge distribution quickly, and then back the launch with major multimedia advertising campaigns. “Non-alcoholic beers used to be seen as the uncool version of your brand, so they didn’t get a lot of marketing dollars,” Ms Lodigiani admitted. But for Heineken 0.0, the company spent big, she said, recommending that countries spent up to 25 per cent of their marketing budgets on the product.

Lastly, Heineken devoted more marketing spend than usual to sampling, so consumers could actually taste the beer. It targeted people at moments not normally associated with drinking, such as athletic events and lunch spots. A television ad with the slogan “Now You Can” drove home the point that Heineken 0.0 could be enjoyed anytime by showing people drinking it at the office, the gym and in a parked car, prompting surprised looks from onlookers.

The tactics seem to be working: Heineken 0.0, which launched in 2017 in 14 markets, has been rolled out to 50 markets globally, including the US last year.

The roll-out helped Heineken achieve a 7.7 per cent increase in sales by volume last year for the group’s flagship brand, its best growth rate in more than a decade. Heineken has about 159 products in its 0.0 range up from 78 only two years ago, and has launched non-alcoholic versions of Birra Moretti, Tiger, and Sol.

“I really believe this can be something very big,” said Ms Lodigiani.