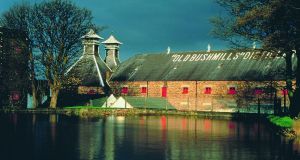 Bushmills Distillery is planning to invest £60 million (€69 million) to expand production of whiskey in the North.

Bushmills, which has been producing whiskey in the Co Antrim village under licence for more than 400 years, plans to develop a new £30 million distillery on its existing site and also construct 29 additional maturation warehouses.

Bushmills Distillery, which is owned by the tequila giant Jose Cuervo, first applied for planning permission to expand its facilities at the site four years ago but it was initially met with environmental objections.

This week Causeway Coast and Glens Borough Council has agreed to grant full planning permission for the proposed development which it said had received zero objections.

The council said the distillery was “of major employment and tourism significance for Bushmills”.

“It is a high employer in the area and provides a tourist amenity for thousands of visitors annually. With the planned expansion of the distillery, additional jobs will be provided for the construction industry and also full-time jobs once operational,” the council said in its planning decision.

According to the council the new distillery “is of large scale” and will also access water from a stream which has traditionally provided the “main water element” for the production of whiskey on the site.

“The scale, nature and design of the proposed new distillery building will reflect the surrounding buildings on site at the present time although they use modern materials which help to differentiate the proposal from the nearby listed buildings,” said the council’s planning committee.

Colum Egan, master distiller, said the distillery was thrilled to have secured planning permission to “produce even more Bushmills for whiskey drinkers around the world” and it marked the next chapter for the distillery, which claims it was first granted a licence by King James I in 1608.

“Our plans for building additional distilling capacity is part of our £60 million plan to double production capacity over the next five years to meet the increasing demand for our portfolio of single malt and premium blended Irish whiskeys.”