Whiskey producers worried about McGregor’s impact on the sector 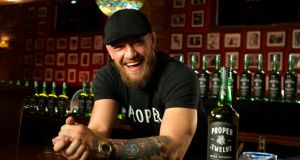 Conor McGregor: he is seen as toxic in some quarters

News that sales of Irish whiskey topped €1 billion in the US for the first time last year should be good cause to raise a glass. After all a prolonged effort has been made to put the brown spirit back on the map globally.

But there has been a somewhat muted response so far from those working in the sector, which is a little unexpected given how good the various players are at promoting themselves. Could the radio silence be because many see the recent surge in sales as a mixed blessing?

The launch of Proper No 12 by renowned mixed martial arts (MMA) fighter Conor McGregor last September has caused much disquiet locally, although few if any people in the sector will openly admit to this in public.

The whiskey has sold about 200,000 nine-litre cases since launch, well short of the 7.3 million cases shipped by market leader Jameson in its last financial year but an impressive start for a new brand, particularly given it is only available in a handful of countries.

“I respect other Irish whiskeys, but I am coming in strong, with passion and with purpose,” promised McGregor at the launch of Proper No 12, and it would seem as though he’s following through with this.

Losing market share to the brash new brand is one obvious concern for other whiskey producers, with Jeffries analyst Edward Mundy last week warning of the possible future impact on Jameson. However, that is not the only reason to fear McGregor’s move into the sector.

Industry players question the quality of Proper No 12, with whiskey expert Seáneen Sullivan writing in The Irish Times last year mentioning its inclusion of E20 to make it look far older than it is.

“It is incredibly mild, with a bitter caramel quality that I can only describe as unsweetened Werther’s Original” is how Sullivan described it in her taste test.