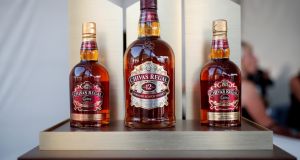 Irish Distillers’ parent Pernod Ricard, which is being targeted by activist investor Elliott, said it was expecting annual profit growth at the top end of its expectations despite a slowdown in sales growth in the third quarter.

Pernod, which owns Jameson whiskey, Mumm champagne, Absolut vodka and Martell cognac, said that for its 2019 financial year it was now targeting an organic rise of around 8 per cent in profit from recurring operations, at the top of its guidance of 6-8 per cent growth given back in February.

Pernod also reported sales on Thursday of €2 billion in the three months to March 31st, a 2.5 per cent rise on a like-for-like basis, yet marking a slowdown from 5.6 per cent growth in the second quarter. This was slightly below the average of analysts’ estimates for 2.8 per cent growth.

Pernod, which had benefited from advanced cognac shipments ahead of the Chinese New Year, had flagged in February that sales growth would moderate in the second half of the year. The slowdown reflects inventory management of Martell cognac in China and destocking in the US.

Pernod, the world’s second largest spirits group behind Diageo, is under pressure from US hedge fund Elliott Management to improve profit margins and corporate governance.

“For full year 2019, in an environment that remains uncertain, we aim to continue dynamic and diversified growth across our regions and brands,” said Pernod chief executive Alexandre Ricard.

In February, Pernod vowed to lift its margins and shareholder returns under a three-year strategic plan that Elliott described as a first small step.

Elliott has blamed Pernod’s underperformance in part on what it views as poor governance, having highlighted that Pernod’s 15-member board needs more diversity and independence since many directors are linked to the Ricard family.

Pernod Ricard has said its goal for the 2019-2021 period is to lift operating profit margins by 50-60 basis points per year provided it can deliver annual organic sales growth of 4-7 per cent.

Having achieved organic sales growth of 6.3 per cent in the first nine months of the current financial year, Pernod Ricard said on Thursday that it was eyeing a 50 basis points improvement in its operating profit margin for the full year.