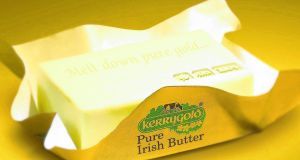 Kerrygold owner Ornua said about 7.5 million packets of the butter were sold each week in 2018.

Kerrygold has become the first Irish food brand to exceed €1 billion in annual sales, helped by its growing popularity in the United States.

The butter and dairy label, with its signature gold wrapping, exceeded €1 billion in revenues last year, confirming its status as one of the State’s most successful food exports.

Kerrygold owner Ornua said about 7.5 million packets of the butter were sold each week in 2018. Its recent success has been driven by sales in the US, where it is now the number two butter brand behind market incumbent Land O’Lakes.

In Germany, its principal European market, a standard 250g block of Kerrygold butter was the fastest-selling food or drink item on supermarket shelves last year, selling out more quickly than a standard one litre bottle of Coca-Cola.

The brand was originally created by Sir Anthony O’Reilly in 1962, when he was chief executive of, what was then called An Bord Bainne, later the Irish Dairy Board, and more recently Ornua, as a means to market Irish dairy produce globally.

The Kerrygold brand name was chosen from a list of 60 suggestions, which included Buttercup, Tub-o-Gold and Leprechaun, and first launched in the UK. Its global success has had a lot to do with slick marketing and advertising campaigns over the years.

Last year, however, it become embroiled in a legal battle connected to its global marketing campaign, which plays up the grass-fed nature of the Irish cows that supply its milk. Ornua claims this is what makes the butter more yellow in colour and tastier than generic equivalents.

However, a legal case taken in California, traditionally a bellwether of consumer trends, claimed this constituted “false and misleading advertising” as Irish cows eat other materials, such as grain or soya, when weather is bad and some of these feeds can be genetically modified. The case was eventually thrown out.

Ornua is, however, facing competition from one of its own shareholders, Glanbia, which has launched its own butter brand, Truly Grass Fed. Tensions between Glanbia and Ornua over the issue resulted in an Ornua shareholders’ meeting being cancelled last December.

Unveiling the news that it had surpassed €1 billion in sales, Minister for Agriculture Michael Creed said: “The Kerrygold brand is an amazing asset for Irish dairy farmers and its promotion of Ireland’s unique grass-fed credentials has been instrumental in enhancing Ireland’s reputation around the world as a sustainable food producer.”

Ornua’s foods managing director, Róisín Hennerty, said: “Today represents a special day for the dairy industry with Kerrygold exceeding €1 billion in annual retail sales. While Kerrygold holds a unique place in the hearts of the Irish people, we are especially proud that the brand has captured the hearts and imagination of consumers all over the world.”

1 Why gift a son now if it eats into his tax-free inheritance threshold?
2 Big Four told to outline plans for audit split in UK by October
3 ‘Over-zealous’ lending practices will kill off housing supply, industry body warns
4 Flights abroad ban could last all summer
5 Mortgage arrears: Prevention is definitely better than cure
6 US stocks climb after huge rally in Chinese shares
7 Stocktake: Playing poker with the day traders
8 Dublin council puts Unicorn restaurant demolition plan on hold
9 Irish pharma sector warns of protectionism as US corners supply
10 You now get almost nothing for your money . . . but it could be worse
Real news has value SUBSCRIBE