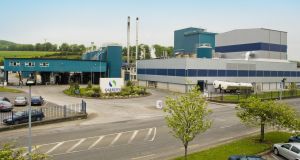 The Carbery Group’s main plant in Ballineen in Co Cork. The group’s profit before tax rose from €24.2 million to €25.1 million last year.

The company behind Dubliner cheese has increased by €22 million the amount it intends to invest in its facilities as part of an ongoing diversification programme after earnings rose more than 5 per cent.

Carbery Group, which last year celebrated 50 years of production, reported improved earnings before interest, tax, depreciation and amortisation to €43.9 million on the back of a 1.5 per cent increase in turnover to €423 million.

The performance followed a year in which farming conditions were tough in the first six months and Brexit uncertainties persisted. Nevertheless, profit before tax rose from €24.2 million to €25.1 million.

The company is now in the throes of a €100 million investment planned to last for the next two years including construction of a €78 million mozzarella production facility which will pit it against listed players such as Glanbia.

The west Cork group, which is owned by four Irish co-operative societies, separately invested €18 million across its global operations including by extending a facility outside Chicago to cater for its American markets. It also acquired Italian flavour company Janousek to improve its European footprint.

Carbery, which employs more than 600 people, now operates from eight locations across Ireland, the UK, the US, Brazil and Thailand. Its plant in Ballineen its the Republic’s largest single cheese-producing facility, producing almost 25 per cent of the country’s annual output.

The company’s dairy business performed in line with expectations despite muted global conditions driven by trade uncertainties. Supplies of milk to the group’s west-Cork processing facility increased by 5 per cent to 536 million litres.

In its nutrition business, Carbery invested in research and development to help grow its specialised portfolio for the infant, sports and clinical nutrition markets globally with a particular focus on Asia and North America.

Synergy, the company’s taste division which supplies flavourings, extracts and essences to a raft of global customers, expanded its Thailand facility in the year to prepare for growth in Asian markets.

Looking ahead, Jason Hawkins, Carbery Group chief executive, said the group was in a “strong position” to deal with long-term challenges.

“As we look forward, acknowledging uncertainties in relation to Brexit and other challenges we may face in the dairy market, we are actively addressing these challenges by diversifying our offering in order to expand into new geographic markets to grow and futureproof our business,” he added.