Alltech: Roll out the barrels 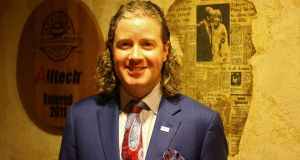 Mark Lyons: at the helm of Alltech, the firm founded by his late father, Dr Pearse Lyons.

For a man whose shoulders now carry the burden of a multibillion-euro company, Mark Lyons is incredibly relaxed.

In March 2018, Dr Pearse Lyons, his father and founder of the agri-nutrition behemoth Alltech, passed away leaving the then 41-year-old with the job of leading a family business that boasts undeniable global ambition.

“The biggest responsibility I have is keeping the culture of the company growing, adopting, evolving,” he says. “I don’t think that within a family business there’s anything more important.”

Meeting on a spring morning inside a mock-up Irish pub on the second floor of Alltech’s global headquarters outside Lexington, it’s clear the new Alltech president and chief executive is very much at home here in bluegrass country, and with good reason.

Over four decades, Alltech has ingrained itself in Lexington, a charming city of 500,000 people surrounded by rolling hills and world-famous equestrian properties. It employs 650 people at its head office, and at facilities dotted around the city. Alltech’s logo has adorned Lexington’s St Patrick’s Day parade for 40 years.

To the north of the city sits Alltech’s 5,000-seater equestrian complex, a championship-size ring that hosted the 2010 FEI World Equestrian Games.

Downtown, Alltech’s Lexington Brewing & Distilling Company is positioned at the cutting edge of the craft beverage world. A stone’s throw from its headquarters is the 18-hole Connemara Golf Course, which Alltech bought in 2006.

And next month, it will draw 4,000 people from dozens of countries to Lexington for ONE19, a major ideas gathering boasting speakers such as survival expert Bear Grylls and business thinker Chris Zook.

From humble beginnings, Alltech has come a long way.

Armed with an expert understanding of distilling and fermentation processes, Dundalk-native Pearse Lyons founded the company from his Lexington garage in 1980 with $10,000 in his pocket.

He set about introducing the idea of nutrition and performance to the monolithic North American animal and crop nutrition industries.

Today, Alltech employs more than 5,000 people and serves customers in 120 countries. Its crop science division is a world leader in R&D with products ranging from lawn care to microbial fermentation to nutrigenomics.

But if agri-nutrition is Alltech’s brain trust, the brewing and distilling world is where its heart lies. At any one time, Kentucky is said to have more barrels of whiskey aging than it does people. Dozens of the state’s 120 counties are dry or “moist”, meaning alcohol sales are illegal or restricted.

It might seem curious that Alltech would seek to get involved in the beverage world and yet that couldn’t be further from the truth: beer and bullocks have a lot more in common than one might think.

Brewing has been wedded to Alltech since its start. As a student, Pearse Lyons worked part-time for Harp Lager in Dundalk before studying for an MA in brewing science and a PhD in yeast fermentation at the University of Birmingham.

The fact that the Lyons family has produced coopers going back five generations meant the weight of history wasn’t easy to ignore, “so starting the [Lexington] brewery 20 years ago was not so much a life-long ambition, but almost a generational ambition of the family”, says Mark.

When a local Lexington brewery was set to shut down in 1999, Pearse snapped it up. “Kentucky [at that times] was Budweiser [country], maybe Miller, and Coors was exotic. There was nothing in terms of a microbrewery or craft beer,” Mark says.

“For us going to bars and restaurants trying to get them to get the product on, even though Alltech was bringing people to Lexington, and hosting events and dinners, it was really difficult. For them to think about adding a beer that was going to be more expensive and was going to taste different. The first years were really tough going for us to get just a tap handle on. That early stage in any market is tough.”

Its award-winning Kentucky Bourbon Barrel Ale and other beers are kept in charred, decanted bourbon barrels for up to six weeks, contributing to a distinct, delicious flavour, though at 8 per cent ABV, it’s not the most sessionable. Its line of ales is also pricier than a lot of other craft beers on the market.

“Dad [Pearse] said ‘we’re going to put this beer in a snifter, we’re going to make this elegant, and we’re going to charge for it’,’” says Lyons. “I think it was the barrel-aging that separated us; we had something that was completely different. It helped elevate the craft and particularly the Kentucky Ale range into a different space. Selling it as a four-pack instead of a six also changed the way people thought about the price point.”

In 2012, Alltech unveiled its $6 million (€5.4 million) Town Branch Distillery, the first to open in Lexington for a century. The same year it joined the coveted Kentucky Bourbon Trail, the first craft distillery to be bestowed the honour.

Last June, it opened the first “legal” brewery and distillery in Pikeville, 230km from Lexington, in eastern Kentucky.

The company invested $15 million in the Dueling Barrels Brewery & Distillery, contributing to the resurgence of a town that’s struggled with job losses and outward migration for decades. In April, Dueling Barrels plays a central role in Pikeville’s annual Hillbilly Days festival that attracts 100,000 revellers from around Appalachia. “They’re able to produce a new beer there every three or four days, so it’s pretty exciting for that part of the world,” says Lyons.

Collaboration is also a feature of ties between Kentucky and Alltech’s Ireland beverage operations. Staff from the Pearse Lyons Brewery in Dundalk regularly traverse the pond exchanging ideas and methods, and the Co Louth brewery has gained a reputation for producing niche and edgy beers, something the Lexington brewery is looking to pursue.

Amateur distillers in Dublin will be pleased to hear plans are in the works for a gin and possibly a whiskey school that’s expected to open in the coming months at the Pearse Lyons Distillery at St James in Dublin’s Liberties. Participants will learn how to make their own spirits in two- or three-hour classes.

Lyons visits Ireland every four to six weeks and says the family had an apartment in Dublin 4 but, as they rarely stayed in it, it was sold. “Especially with the beverage business, we found that you want to be staying in your customers’ hotels and being able to talk to them about the product, being there in the morning,” he says.

Alltech’s footprint in Ireland is not insignificant. Its European headquarters is situated outside Dunboyne, and in 2016 it bought Keenan, the Carlow-based agriculture machinery company. It runs its advanced management course or “mini MBA” out of UCD’s Michael Smurfit Graduate Business School, while the Dublin docklands-based Pearse Lyons Accelerator supports late-stage, ag-tech start-ups around the globe.

Though Ireland may well be Alltech’s spiritual home, it has always sought to develop a global presence. Lyons is already a 17-year veteran of the company. Not long out of college, he was dispatched to Serdan, a small Mexican town, where he headed up an Alltech fermentation plant that employs 300 people. “I went down initially to learn the process and ended up staying for 3½ years,” he says.

When the chance to experience first-hand China’s agribusiness landscapecame up in 2012, months after the introduction of one of Alltech’s leading ales to the local market, Lyons, who speaks five languages and has a working knowledge of Mandarin, jumped at the opportunity.

“China puts out five-year plans and says, ‘This is where we’re going.’ I found that extraordinarily useful, to say, ‘These are the issues they are looking at.’,” he says.

China is in the midst of working out critical agrifood issues such as environmental impact, self-sufficiency and transparency – issues Lyons feels many Irish companies excel in.

“You’ve got to go with a mindset of partnership. I think that people who go and want to make a deal – that’s not the way it’s going to work – it’s about seeing the long-term. You’ve got to commit. Go do a couple of visits – it’s not a place where you can figure everything out in one go. But that doesn’t mean don’t make money.”

As much as China is important in anchoring Alltech’s emerging markets portfolio, it’s been North America where the company is doubling down recently, a trend, Lyons says, that’s likely to continue for the next three to five years.

In 2015, Alltech bought Ridley, a Minnesota-based animal feed and nutrition company that had a 30 per cent share in the Canadian feed market, for $427 million.

And yet there are challenges aplenty. A year-long US trade war with China and increased tariffs by Europe and Canada have contributed to exports of American whiskey declining by 8 per cent late last year. “Trade disputes are something no business likes; it’s an issue that the Kentucky Distillers Association has been talking a lot about,” says Lyons. “[But] we’re pretty niche.”