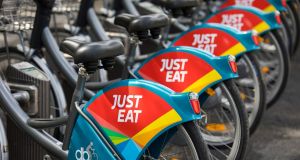 Outside the UK, JustEat orders grew by 40 per cent to 29.5 million, fuelled by good growth in Canada, Italy, Switzerland and Ireland.

Just Eat has reported a slowdown at its UK business, with the online delivery firm blaming warm weather and the timing of Easter, but orders across the group were up significantly, driven by growth in Ireland and other countries.

The group saw UK orders grow 7.4 per cent to 31.9 million in the three months to March 31st, compared with growth of 24 per cent in the same period last year. It blamed strong comparative figures, “unseasonably warm weather in February”, and Easter falling entirely in the second quarter.

The firm said it expected an improvement in UK order growth during the remainder of the year. Across the group as a whole, orders were up 21 per cent to 61.4 million, helped by new initiatives and strong international growth. Outside the UK, orders grew by 40 per cent to 29.5 million, fuelled by good growth in Canada, Italy, Switzerland and Ireland.

Interim chief executive Peter Duffy said: “Just Eat is on the right path to be the leading hybrid marketplace for online food delivery and we are confident in the delivery of our strategy.

“Many of our international markets have performed very well in the period although, as expected, we saw softer UK order growth in the quarter. We are making good progress and continue to execute at pace.”

Just Eat reiterated its full-year guidance of revenue in the range of £1 billion to £1.1 billion and earnings of £185 million to £205 million. The food firm has come under intense pressure recently from shareholder Cat Rock, which has ripped into the company over recent board appointments and has ordered it to seek a merger with an industry peer.

The group, which owns 2 per cent of Just Eat, has said this would be a better outcome than relying on the board to choose a new chief executive following the departure of Peter Plumb. Alex Captain, Cat Rock managing partner, said on Friday: “These results clearly underscore the need for urgent change at Just Eat. The company only grew orders 7 per cent in the UK despite benefiting from delivery investments and its acquisition of HungryHouse.”

“These results are unacceptable given that the average customer still only orders less than once per month in the UK and population penetration is still only about 20 per cent. Global peers are growing much faster in markets with similar levels of frequency and penetration. “

1 Avoca warns of redundancies due to coronavirus
2 Virgin Media vows to withhold sports channels until Eir ‘pays its bill’
3 Coronavirus: We must save lives but we also need to live
4 Coronavirus spreads to sandwich king
5 Errant texts highlight weaknesses in banks’ digital shift
6 Over 400 complaints from migrant workers at meat plants lodged with WRC
7 Taxi app Free Now blames ‘technical issues’ for driver payment delays
8 Revised help-to-buy scheme opens for applications
9 The Irish Times Company of the Year: the three finalists
10 Divorce: What will it cost and can you afford it?
Real news has value SUBSCRIBE