Irish dairy ‘a net loser’ regardless of Brexit outcome 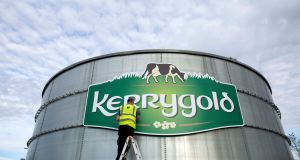 Ireland’s dairy industry will be a “net loser” regardless of whether the UK achieves a hard or soft Brexit, Ornua’s chief executive Kevin Lane has warned.

More than a third of Ornua’s €1.75 billion turnover is generated in the UK, leaving it extremely vulnerable to a change in Anglo-Irish trading relations.

Mr Lane said the decline in sterling was already having an impact and would hit group profits this year as hedging arrangements lapse.

On the likelihood of maintaining tariff-free access to the UK market after 2019, he said he was optimistic that that would be the case but suggested such an outcome was still likely to involve some level of restriction.

“While we’re hoping for the minimum amount of trade barriers or levies or fines, we’re not naïve enough to think there won’t be some.”

In the cross hairs of Brexit from a dairy perspective is cheese, with over 50 per cent of Irish cheese sold into the UK market.

Ornua’s Pilgrim’s Choice brand is the UK’s number two cheddar brand and the fastest growing, worth about €85 million in sales a year. Mr Lane said the group was attempting to reduce its reliance on the UK market.

Ornua, formerly the Irish Dairy Board, is Ireland’s largest dairy exporter. It sells and markets products on behalf of some of the State’s leading dairy co-ops.

Despite the uncertain trading environment, Ornua saw operating profit jump 46 per cent to €26.6 million last year on foot of a record €900 million in sales of its flagship butter brand Kerrygold.

The group sold DPI speciality foods at the end of 2015 and, excluding this sale, group turnover rose by 9.1 per cent to €1.75 billion while group earnings before interest, taxes depreciation and amortisation increased by 18.4 per cent.

A members bonus of €14.5 million was declared in 2016 which includes a final bonus from the gain on the disposal of DPI of €5 million.

“These results were achieved against a backdrop of significant market volatility and political uncertainty,” Mr Lane said.

Ornua’s annual report shows the group’s top 15 executives received €4.3 million in pay, bonuses and pension entitlements last year, down marginally from €4.4 million. The co-op does not break out the individual remuneration but insists its members are happy with the level of transparency.

1 In six months we will be in the grip of a 1980s-style recession
2 Angela Merkel sweeps in to save the euro zone
3 Property price drop of up to 12% this year a ‘reasonable’ assumption – McDonagh
4 Chartered Land moves closer to approval for Dublin’s tallest tower
5 Aer Lingus wants quarantine period axed to resume flights in July
6 Should my mam wait for house prices to drop before buying?
7 Donohoe warns of cost of pandemic as budget deficit swells to €6.1 billion in May
8 Government to form task force to rescue aviation sector
9 Ibec warning, Jurys plans and what to do with Facebook and Twitter?
10 Stocktake: Has Warren Buffett lost the magic touch?
Real news has value SUBSCRIBE