Green light given for Wetherspoon ‘superpub’ in Dublin 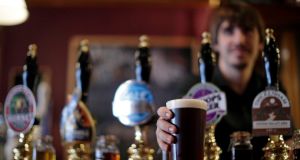 A Wetherspoon pub: the group already operates five pubs in Ireland – four in Dublin and one in Cork. Photograph: Matthew Lloyd/Bloomberg

An Bord Pleanála has given the green light for a “superpub” in the Camden Street area of Dublin to pub giant JD Wetherspoon plc.

The appeals board has granted planning permission for the €4 million development at Camden Hall that also includes a 98-bedroom hotel in spite of local concerns that the pub would be part of a continuing trend “to completely alcoholise Camden Street”.

The board ruling represents a comprehensive planning victory for JD Wetherspoon as the ruling omits a planning condition imposed by Dublin City Council seeking to curtail the size of the pub.

The Dublin City Council ruled that a 244sq m dining area and courtyard with tables and chairs be omitted from the plan. However, this has been overturned on appeal.

Already, Wetherspoon operates five pubs here – four in Dublin and one in Cork.

A spokesman for the UK-based Wetherspoon yesterday described the ruling as “great news” stating that the project will lead to the creation of 200 jobs.

He said that the firm hopes to commence work on the project “sooner rather than later”.

Local man and appellant Barry Chambers told An Bord Pleanála that allowing another pub in the area, “not to mention the large-scale drinking establishment being proposed, would be seriously detrimental to the residential amenity and character of the area”.

Mr Chambers was one of a number of local residents to oppose the plan.

In his appeal, Mr Chambers argued that “drink fuelled ever-increasing noise, nuisance and anti-social behaviour, ranging from the benign to the very serious which goes hand-in-hand with the drinking culture has already, regrettably, started to change the character of the area for the worse”.

Mr Chambers stated: “The introduction of a superpub selling cheap alcohol into the melting pot does not bear thinking.”

He said the area is densely populated with young families and “it is sincerely hoped that we do not go further down the Temple Bar route – an area that has been blighted by the overconcentration of pubs and late-night drinking”.

In a rebuttal to Mr Chambers’ appeal, Wetherspoons said that to imply the proposal included a superpub “is disingenuous, misleading and clearly not the case”.

Wetherspoon said the proposal “is not intended as a late-night destination with the latest expected opening hours to be at 12.30am at the weekends. The venue will be focused on the service of food with a complimentary drinks service and will play no amplified music”.

The pub firm stated that there is not an overconcentration of pubs in the area.

The board inspector in the case said that the 1,184sq m of floor space for the restaurant/bar/courtyard gardens with tables and chairs was a considerable quantum of development in this area.

The board gave the plan the go-ahead after ruling that it would not adversely affect the character or architectural significance of the historic buildings on site; would not seriously injure the amenities of properties in the vicinity and would be acceptable in terms of traffic safety and convenience.