Freshii to create 100 jobs with new outlets in the North 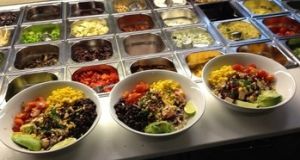 Canadian fast-food franchise Freshii is to create 100 jobs in Northern Ireland with the opening of nine more stores.

The company, which was started by a 23-year-old in Toronto just over a decade ago, currently has six outlets in the Republic with new stores opening soon in Smithfield and Leopardstown in Dublin and also in Limerick.

The company’s second and third stores in the North are also due to open shortly.

Aramark, the contract caterer that owns Avoca Handweavers, recently signed a partnership deal with the chain to open outlets in Ireland and Britain.

The local master franchise is owned by former Aryzta executives Dave O’Donoghue and Cormac Manning, who both worked in Cuisine de France.

The chain is targeting more than 30 outlets across Ireland and Britain over the next five years.

Matthew Corrin started Freshii in 2005. The company opened its first 100 locations faster than both Subway and McDonald’s.

“Freshii’s core mission is to help people live healthier and better lives by making nutritious food convenient and affordable and the reaction in Ireland has been phenomenal so far,” said Mr O’Donoghue, Freshii Ireland’s chief executive.