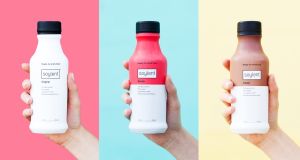 The round, which was led by GV, formerly Google Ventures, brings Soylent’s total funding to t $74 million (€67.4m), and places the startup on a trajectory to expand internationally and into traditional retail outlets such as supermarkets and coffee shops.

Soylent’s products, which include bottled drinks, food bars and powder mixes, are only available online.

Rob Rhinehart, Soylent’s founder and chief executive officer, declined to say where his company would begin distributing, but added “I’m looking forward to making Soylent available pretty much anywhere you can get a coffee”.

It has been a tough year for Soylent, which launched in 2013 as the go-to food substitute for busy coders and venture capitalists. This past summer reports of illness surfaced after the Los Angeles-based startup began experimenting with a new algae ingredient. Soylent issued a recall, and removed algae from its products.

Last month the company faced another gaffe when one of its powders, which had been labelled lactose-free, was found to contain milk traces.

The company said the incidents had little impact on sales or investor confidence.

In the first quarter of 2017 Soylent said its net revenue almost doubled compared with the quarter a year earlier. Soylent declined to provide sales figures.

A person close to the company says Soylent is selling about 2 million units a month. –