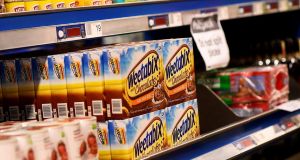 Bright Food Group of China agreed to sell Weetabix to Post Holdings for about £1.4 billion after owning the British breakfast staple for five years, during which it struggled to interest Chinese consumers in cold cereal.

When Bright Food acquired the maker of the oval-shaped cereal bricks in 2012 it said it wanted to grow the brand in China and overseas. It floated the idea of listing Weetabix in 2014, but the cereal never gained enough traction in a country where consumers traditionally eat hot breakfasts like congee.

“We can see that demand for cereals is growing due to health-consciousness, especially among female consumers exposed to western lifestyles, but Weetabix did not make much inroads, probably because Bright Food does not have experience in this area,” Jiaqi Du, research manager for packaged food at Euromonitor International in Shanghai, said by phone.

The deal gives Post, the owner of brands such as Grape Nuts, Shredded Wheat and Honey Bunches of Oats, a stronger presence in the UK.

The country accounted for four-fifths of Weetabix’s 346 million pounds of revenue in the year ended January 2nd, 2016, according to financial statements. Total sales dropped 1.6 per cent from a year earlier, and profit fell 15 per cent to £84.6 million.

Overseas owners of British companies have been hit by the fall in the pound since the vote to leave the European Union, which reduces their earnings when converted into local currencies. Yet Brexit has prompted a flurry of acquisitions by cutting the price of UK assets.

The Weetabix deal was confirmed by Bright Food spokesman Pan Jianjun by phone on Tuesday. Bright Food, whose 2012 deal valued the cereal-maker at about 1.2 billion pounds, owns a 60 per cent stake, while Baring Private Equity Asia Ltd holds the remaining 40 per cent.

Representatives for Post didn’t respond to requests for comment. China’s breakfast cereal market was worth $933 million in 2016, according to Euromonitor, with ready-to-eat cereals like Weetabix accounting for about one-quarter of that total.