What do Skibbereen and Michael Phelps have in common? 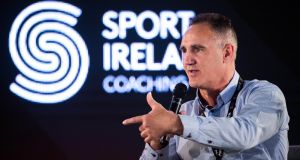 This was a convention you could come to and hear Skibbereen and Michael Phelps mentioned in the same breath.

It was one where Billy Walsh aired his hopes and dreams that the United States would again rule the boxing world and where a warning shot out across the pristine Sport Ireland National Indoor Arena about the dangers of doping and sport coalescing with the entertainment business, and of the bogeyman of television determining the timing and schedules of events.

Name one thing you would do to improve the sport back in Ireland, O’Leary was asked.

“Let people who know what they are doing make the decisions,” she replied. The room was left to draw its own conclusions on that.

“Focus on the ones who do the business,” chimed Walsh with Finbarr Kirwan chipping in with, “Getting athletes to perform at the right time.”

Kirwan should know. He was poached from Sport Ireland by the United States Olympic Committee (USOG). He is now senior director of sport performance and is responsible for golf, track and field, shooting, equestrian, weightlifting and sports climbing.

It was Kirwan, on the main stage with some of Ireland’s greatest sporting exports including O’Leary, Walsh, Ken Lynch, who now works in New Zealand High Performance and the World Anti-Doping Agency’s Tony Cunningham, who was responsible for the marriage of Phelps and Skibbereen.

Kirwan worked with the world’s greatest swimmer (23 Olympic gold medals) and his coach Bob Bowman in the years leading up to the Rio Olympic Games.

“In Skibbereen you have the intersection of great coaching and just truly world-class athletes. That stuff doesn’t happen by accident,” said Kirwan.

“It goes back to Bob Bowman and Michael Phelps. You look at the North Baltimore Aquatic centre. Look at where Michael trained for the majority of his career. They made a virtue out of the challenging environment they were in.

“Bob speaks openly about it. Let’s say the facility wasn’t the best facility. But they made the most of what they had and that was part of what made him into the great athlete.

“It’s a similar situation in Ireland. Katie Taylor’s situation and the environment she was coming from. Seeing an Irish woman succeed at that level in that environment, the stress of that environment and for her to be able to get the job done was exceptional.

“The sports I work with won 73 medals in Rio but her capacity to succeed was superb and I think it’s the same situation as the rowers.”

It is Kirwan’s job to now look at the 2028 Games in Los Angeles. With swimming part of his brief as well as golf, they hope the top US golfers will by then have divested themselves of their Olympic lethargy.

The swimmers? Well it’s 11 years away so they are looking into their crystal balls already at children, who look like they have the right stuff. But it’s not his job to twist the arm of the golfers.

It was a place where speaking and opinions counted for something, where the whole idea was to vent and discuss. Walsh didn’t disappoint, Schmidt did.

“John Joe Nevin,” said Walsh. “I texted him when I was in the final of the World Championships [in August]. He came to my mind.

“He’s 27 years of age. He should have been at that World Championships. I did a deal for him to be on 60 grand to stay amateur. That was 40 grand from Sport Ireland, a 10 grand medal bonus and 10 grand for five appearances for the AIBA and Sports Council. He left all that behind him.

“I’d say if someone made a plea for him to move back to amateur it could happen . . . I think if he’s not doing anything in the pro game, there’s no better place for him to go.”

And Schmidt? On his wish the media were not allowed to attend. “Lessons Learned in Driving Excellence.” Heard it was good.