Rory McIlroy: ‘It has not been the year that I wanted’ 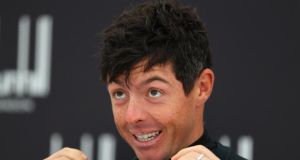 Rory McIlroy is looking to avoid a first season without a win since 2008 when he tees it up at the Alfred Dunhill Links Championship this week.

The Northern Irishman claimed his first professional victory at the Dubai Desert Classic in 2009 and since then has won every season on either the European, PGA, PGA of Australasia or Asian Tour, including claiming four Majors.

That run will come to an end if the world number six does not take victory over St Andrews, Kingsbarns and Carnoustie this week, after a season that has seen him plagued by a rib injury he sustained last winter.

McIlroy admits his marriage in the summer has taken the edge off his problems on the course but he is determined to play well before shutting down for the season to recover from his injury.

“In a golfing sense it has not been the year that I wanted but a lot of great things have happened to me off the golf course and 2017 will always be a year I remember because of that,” he told a press conference at St Andrews on Wednesday.

“It hasn’t been the year I wanted in terms of my career but you’re going to have years that just don’t quite go your way. There’s some things that are out of your control. I’ve tried my best to play well and persevere and play through an injury and it just hasn’t quite happened for me.

“I think this year has not been anywhere near as bad as the year I had in 2013 and I bounced back from that year pretty well the year after. Hopefully I can do the same next year, I guess.

“I’m not under pressure to win. The result, if you play well and things go your way, that takes care of itself. But it would just be nice to string a few more good rounds together and put in a performance and that would be a nice way to end the year.”

McIlroy, who hasn’t played the event since 2014, will team up with his father Gerry in the pro-am team format. And having finished inside the top three on four occasions, he is looking forward to another fun week.

“The Dunhill has always been a great week, it’s always been a very enjoyable week. I’ve always seemed to play well here probably because of sort of the relaxed atmosphere that there is. It’s nice to go and play the different courses and get back at night.

“It’s a very social week, it’s great to catch up with everyone. I’ve been looking forward to this week for a long time and hopefully I can end the year on a positive note and turn in a couple of good scores and give myself another chance to win this week, I guess.”

England’s Tyrrell Hatton returns to Scotland as a defending champion for the first time and he believes the weather will play a major role in the outcome of the event.

“Playing three courses, a huge part of that depends on what kind of draw you get,” he told his own press conference.

“You can play Kingsbarns or St Andrews on a really calm day and shoot decent scores and if you get Carnoustie, or to be honest any of the other courses, on a really tough day then you’re going to struggle.

“That’s what links golf is about. Hopefully whatever sort of conditions there are, I can manage them well.”

Paul Dunne returns to action four days after winning his first European Tour event at the British Masters, while Pádraig Harrington, Graeme McDowell, Shane Lowry and Gavin Moynihan are the other Irish in action in Scotland.