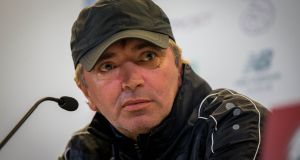 Moldova manager Igor Dobrovolski: “We want the team to play as confidently and as aggressively as possible.” Photograph: Ryan Byrne/Inpho

Group D’s basement side Moldova have picked up just two points so far during this qualification campaign – but a third on Friday night would surely consign Martin O’Neill’s Republic of Ireland to the role of frustrated observers when the first ball is kicked in Russia next summer.

In theory, Ireland’s penultimate fixture is their easiest – the Moldovans have mustered four goals all campaign, and their two draws were earned home and away against Georgia.

However, a draw of their own in Tbilisi in September means Ireland know there can be no slip-up against the group minnows at the Aviva Stadium thus creating a sense of trepidation heading into an otherwise regulation fixture.

The Moldovans are without a competitive win in 18 games – a run stretching four years – yet their manager Igor Dobrovolski is adamant three points in Dublin wouldn’t turn a disappointing campaign into a good one, “nothing depends on one game,” he said.

Yet for Ireland, there is an awful lot depending on this one game and anything but a victory would lead to serious questions over the FAI’s decision to hand Martin O’Neill a new contract for the Euro 2020 qualifiers before the current campaign has even reached its conclusion.

And it is not lost on Dobrovolski and his players that they have the chance to gate crash the party on Friday night, and deflate Ireland’s hopes earlier than anyone would have expected.

Is the prospect of denying the home side a place in Russia an added incentive for Moldova?

“We tried to do this with the other national teams”, he said. “We tried this with Wales, we try to do whatever we can and play as well as we can.”

Moldova came minutes of doing Ireland a huge favour in last time out, when it looked like Wales were heading for a likely terminal 0-0 draw in Chisinau.

However, with 80 minutes gone Hal Robson-Kanu broke the deadlock, with an Aaron Ramsey goal in injury time ensuring Chris Coleman’s side would head into the final weekend of qualification in second place in the table.

Yet while the nature of Moldova’s defeat to Wales must have been deflating, Dobrovolski has insisted it hasn’t affected the confidence of his side ahead of their trip to the Aviva.

Moldova gave Ireland a brief scare when the two sides met in Chisinau on October 9th last year, with James McClean goals in the 69th and 76th minutes giving the visitors a 3-1 win after Igor Bugaev had cancelled out Shane Long’s opener on the stroke of half-time.

Yet despite their good showing, Dobrovolski, who played for the Soviet Union in the 1990 World Cup, maintains his side have plenty of room for improvement.

“There were some mistakes and we conceded some goals. We want the team to play as confidently and as aggressively as possible, and at the same time we do not have anything to lose at the moment.”

One player set to feature in Friday night’s game is Rostov midfielder Alexandru Gatskan, who started as the Russians held Manchester United to a 1-1 draw in the last-16 of the Europa League last season.

And the 33-year-old conceded it has been a poor qualifying campaign for his side: “I don’t think we have achieved anything and I believe it was probably one of the weakest campaigns for qualification for the World Cup for our national team.”

Wales cry foul over Furlong’s scrum technique 15:01
Rowing: Ireland women to trial in Italy 13:14
Son Heung-min out for several weeks with broken arm 12:48
Mako Vunipola to miss Ireland game for family reasons 12:51
Man City’s Abu Dhabi owners not the sort to back down over ban 10:51

1 Gerry Thornley: England primed to show their best against Ireland
2 Should fans be allowed drink in the stand at sporting events?
3 Mako Vunipola to miss Ireland game for family reasons
4 Man City’s Abu Dhabi owners not the sort to back down over ban
5 Frank Lampard says Harry Maguire should have been sent off
Real news has value SUBSCRIBE
Crossword Get access to over 6,000 interactive crosswords