The David Clifford effect: What can we expect and when? 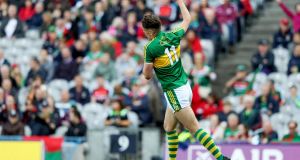 David Clifford hasn’t played senior football for Kerry yet, but he is already expected to stop Dublin from winning four, and definitely five, All-Irelands in a row.

The man who captained and inspired the Kingdom to a fourth consecutive All-Ireland minor title earlier this month has scored 10-68 in his 12 minor championship matches over the past two seasons.

Yet if he is to be a key man for Kerry in winning Sam Maguire next summer, he’ll become just the second player in the qualifier era to start in a senior final and win it in their first year out of the minor grade.

So since 2001 and the start of the qualifiers, McBrearty, O’Connor and a certain Colm Cooper (in Kerry’s 2002 final loss to Armagh) are the only three to have started in senior finals a year after being minors.

It’s a remarkable stat that puts into perspective the challenge facing Clifford to break into the Kerry XV next summer, never mind making an All-Ireland winning impact.

During the qualifier era the average age of a football All Star has been 26. In those 16 seasons only one player has picked up an All Star in their first season out of minor. That was Cooper in 2002, and we all know the impact that he went on to have for the Kingdom; winning five All-Irelands and seven more All Stars. He managed 3-15 in his debut championship campaign.

There is no doubt that Clifford, like Cooper, is a rare talent. In this year’s minor final win over Derry, the 18-year-old had 34 possessions; he scored 4-4 from play, struck the post on three occasions and directly assisted five scores. He cleanly caught four of the six high balls sent into him, with 31 per cent of his scores/assists coming off his right side and the other 69 per cent coming off his favoured left. He has it every way.

Yet there have been numerous other exceptional minors over the past decade – and most struggled somewhat in their breakthrough season. Westmeath’s John Heslin caught the eye of AFL scouts by lording the middle of the park against Meath’s Conor Gillespie and Dublin’s James McCarthy in the 2010 under-21 championship – when he was still a minor. He made his senior debut a year later and failed to make much of an impact in defeats to Wexford and Antrim.

Michael Murphy made his Donegal senior debut in 2007 while still a minor, and despite scoring 1-3 in his first two games, in their eventual qualifier exit he was held scoreless against Monaghan.

Aidan O’Shea was another to play both minor and senior in the same year. In 2009 he scored 3-5 in his first senior season on the edge of the square, although he only managed a point in the Connacht final and he was replaced in the All-Ireland quarter-final defeat to Meath.

In 2012 Ciarán Kilkenny was the talk of the capital after starring for the minors a year earlier, and while he scored 0-3 in the semi-final defeat against Mayo, it was his only senior start that summer.

Tommy Walsh gave one of the great exhibitions of fielding in the 2006 All-Ireland minor final, but he still had to bide his time in Kerry, and it wasn’t until the 2008 season when he was unleashed upon the senior championship.

The transition between senior and minor is not a given, and it is certainly not a seamless one, even for the most talented players like David Clifford.

Since Tyrone won the minor All-Ireland in 2010 – with Conor Clarke, Niall Sludden, Ronan O’Neill, Richie Donnelly, Conán Grugan and Pádraig McNulty all making the step up – from the eight eventual minor winners a combined 24 players have made senior championship appearances. That’s an average of three a year (only including players who featured in the respective minor finals).

In 2008 Tommy Walsh went on to win Young Footballer of the Year, like most of the great minors, making his mark in his second year out of the minor grade.

While Cooper picked up an All Star in his first year out of it, Kieran Fitzgerald (Galway, 2001), Tyrone’s Seán Cavanagh in 2003, and Cork’s Aidan Walsh in 2010 picked up the award in their second seasons as adult footballers. And since 2001, 15 players have started in All-Ireland finals in their second year out of minor, in comparison to three starting in their first year.

As for the Young Footballer of the Year winners; since Walsh, Michael Murphy won it in his second year out of minor, before Cillian O’Connor (2012), Aidan Walsh, Jack McCaffrey, Ryan McHugh and Diarmuid O’Connor (won it in 2015 and 2016) did likewise.

However, Cillian O’Connor first received the award in 2011 in his first year as an adult footballer.

Last weekend, Clifford was held to 0-1, from a free, in the Kerry club championship. In the space of six days, for some he had gone from saviour to, “well it’s a different ball game in adult football”. Realistically, he had less than a week to rest up from his All-Ireland winning exploits, playing in a team who scored only 1-6 and were beaten by nine points.

He is a special talent and – even though Brian Ó Beaglaoich and Tom O’Sullivan are the only two players in Éamonn Fitzmaurice’s five-year tenure to start a championship game under the age of 22 – he’s almost certainly in Kerry’s plans for 2018.

And he will be needed. Dublin are already on three in a row, and they’ve won four of the last eight All-Ireland under-21 titles. It’s hard to see them being stopped, and Mayo are ahead of the Kingdom right now too, but Kerry are building. Setting up for a future domination of their own.

In five years we might be talking about splitting David Clifford in two, but despite all the justified furore, it’ll most likely be 2019 before he starts winning anything on his own.

1 Ireland’s autumn of discontent continues with abysmal Georgia showing
2 Ireland 23 Georgia 10: How the Irish players rated
3 No fireworks but Limerick get the job done against Galway
4 Jim McGuinness: There is a way to save championship and make it competitive
5 Once in a blue moon: Cavan’s overnight success 15 years in the making
Real news has value SUBSCRIBE