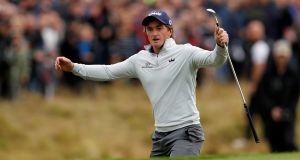 Ireland’s Paul Dunne celebrates after chipping in on the 18th during the final round to win the British Masters. Photo: Lee Smith/Reuters

Prior to Paul Dunne’s stunning 61 to win the British Masters at Close House on Sunday, the 2017 season was set to be a rare one for Irish golf.

With just eight events to go it looked like this could be the first year since 1994 that an Irish golfer had not won on the European Tour. But Dunne’s chip-in on the 18th hole for his maiden professional win confirmed that there has now been an Irish winner on tour every year for the last 23 seasons. Speaking from St Andrews where he has pitched up for the Dunhill Links Championship, the 24-year-old tells The Irish Times that it was his fellow Irish players who drove him to success, both on and off the course.

Seeing the name ‘Rory McIlroy’ charging up the leaderboard in your wake and playing the last seven holes in five under par to post 17 under would be enough to make any man crumble, no more so than someone looking for his very first win on tour. But Dunne instead used it to his advantage in maintaining his aggressive play and, ultimately, beating McIlroy by three shots.

“I think that [having McIlroy chasing] helped,” he says. “If there was someone else who was three shots behind I would have been thinking ‘well maybe he’ll make a move, maybe he won’t, maybe pars are good enough’. But because it was Rory behind I knew that he’d make a run and make some birdies. So that made me 100 per cent sure that I needed to make more birdies to win – it wasn’t going to be good enough to par my way in on the back nine. It made me keep playing aggressive and not think that it was all over and that all I had to do was not mess it up.”

We probably all woke up a bit worse for wear this morning but it’s hard to win so when you do you want to celebrate!

Off the course the camaraderie between the Irish contingent on tour has always been strong. From the days of Christy O’Connor junior, Eamonn Darcy and the likes trekking down to South Africa to play during the winter to Paul McGinley and Pádraig Harrington winning the World Cup in 1997, it’s been a support base for the players coming from these shores. Shane Lowry’s reaction to Dunne’s win on Sunday proved that spirit is still well and truly alive and they didn’t miss the chance to celebrate in the most Irish of styles.

“I went straight up to Scotland, Shane [Lowry]gave me a lift up with Darren my caddy. Then we went out for a few drinks in St Andrews last night with Shane and [Pádraig]Harrington and a few of the Irish caddies and had a good night – we probably all woke up a bit worse for wear this morning but it’s hard to win so when you do you want to celebrate!”

It was a well deserved few pints both for the player and his caddy. While Dunne says he rarely doubted himself during that fateful 61, he points to bagman Darren Reynolds as being they key component when any sort of negative thoughts even threatened to creep in.

“I don’t talk a huge amount when I play and I was so much in a mindset that I was just in my own head. He’s played a pivotal role all week and all year but the thing he did the best on the back nine was when he saw a little doubt maybe creep into my mind or a little sense that I might ease off, he pulled me aside and said ‘listen, keep the foot down. You don’t know what will happen here. Pick your target, commit to your shots and just play to play well. Don’t play not to play poorly’.”

It was that strategy which stood to him and was mixed with a tactic which splits so many golfers. Before Sunday’s final round, Robert Karlsson – who was leading at the time and playing alongside Dunne – told Sky Sports that he wasn’t going to look at any leaderboards the whole way around. It’s a divisive issue across the sport with some players preferring to play their own game while others want to know where they stand. Dunne is of the latter mindset. From the very beginning he knew exactly what his position was and never held back in looking to increase his lead.

“I was definitely nervous but I was quite determined. I just wanted to go out and win and not allow someone else hand it to me. If I just went out and play well enough so no one could catch me, that was kind of my mindset for the day. I was quite focused on that so when I got nervous I just kept going on that though, kept trying to push forward and just basically get in front and then put my foot down.”

Birdies at the first, the fourth and the fifth, followed by an eagle at the sixth, put him into the lead and, from there, he never relented. Knowing he was fully in control of his game and playing some of the best golf of his life he never backed off but, even at that, shooting a 61 and getting to 20 under was beyond even his wildest dreams.

“God, no. I don’t think you ever go out thinking you have to shoot 61 but I was thinking that, with 12 under leading, six people at 11 and another seven people on 10 under it was bunched and that someone would get to at least 16 under. The mindset was just keep my lead and keep extending it. I never thought I’d get to 20 but I knew if I kept pushing forward after that start then everyone else was too far behind to catch me – just put the foot to the floor and don’t look backwards.”

After narrowly missing out on a first win at the Trophee Hassan II in Morocco in April and finishing with rounds of 65 and 66 at his most recent event in Holland, Dunne knew he was in control of his game and playing well. Now, after capturing his first win, even more avenues open up. The Greystones man will make his World Golf Championship debut at the HSBC Champions in China at the end of the month while also looking to improve his current placing of 12th in the Race to Dubai rankings and hopefully be on the receiving end of the bonus prize money dished out to the top 10 at the end of the year.

As he says himself: “I’m playing great so I really don’t see the point in taking a break. I don’t feel that there’s a part of my game at the moment that I’m struggling with at all so I feel pretty in control of most things – the scores don’t lie!”

1 Gordon D’Arcy: If Farrell can tap into our self-worth, we’re all on a winner
2 Winds of change as Ireland name a refreshed team, picked on form
3 Who is Caelan Doris? Meet Ireland’s newest rugby star
4 Nike Vaporflys won’t be banned but regulations will tighten
5 Navratilova apologises for breaking protocol with protest
Real news has value SUBSCRIBE

Seán Moran: Election fever a reminder of the GAA's fertile political soil 07:00
Navratilova apologises for breaking protocol with protest 06:50
Nike Vaporflys won’t be banned but regulations will tighten 06:39
Gordon D’Arcy: If Farrell can tap into our self-worth, we’re all on a winner 06:15
James McClean: ‘Abuse in the last few games has simmered right down’ 06:00
Here is your handy guide to sport on television this week