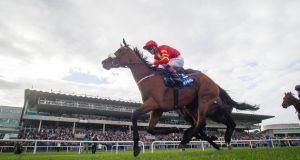 Pat Smullen and Zhukova will line up for the $500,000 Flower Bowl Invitational at Belmont Park on Sunday night. Photograph: Ryan Byrne/Inpho

Colin Keane and Pat Smullen take their struggle for the jockeys title to Limerick on Saturday although the young pretender will have Sunday’s Navan programme to himself.

With less than a month of the season remaining, Smullen instead switches his attention to New York on Sunday night where Zhukova lines up for the $500,000 Flower Bowl Invitational at Belmont Park.

Dermot Weld’s mare is one of six runners for the mile and a quarter Grade One which the Curragh trainer landed 14 years ago with Dimitrova.

Zhukova won the Man O’War Stakes at Belmont in May and her principal opposition this time could come from the Chad Brown-trained pair Dacita and Grand Jete, first and second in August’s Beverly D Stakes in Arlington. The Belmont race is due off at 9.46pm Irish-time.

Smullen’s pursuit of Keane has been one of the flat season’s principal narratives in recent weeks and Limerick’s featured Martin Molony Stakes could see another memorable head-to-head between the pair.

Weld’s one-time Derby hope Zawraq returned to action with a fine run behind Riven Light at Listowel last month and is set for just the fifth start of his injury-ravaged career in the Listed contest.

That Listowel evidence suggests very testing conditions won’t be an issue for Smullen’s mount but he could still find it tough to get the better of the three year old Cannonball.

Ger Lyons’ runner appears to be rapidly on the upgrade and was beaten less than a length behind Eziyra in the Enterprise Stakes over Irish Champions Weekend.

Keane can maintain his championship momentum with the aid of Edward O’Grady’s Fair Game in the Limerick finale before focusing his attention on Navan’s Irish Cesarewitch card.

He rides Snow Falcon for Noel Meade in the €100,000 feature which sees Willie Mullins aiming for a third Cesarewitch victory in a row.

The champion jumps trainer is represented this time by Gustavus Vassa although there could be value in siding with the sole cross-channel raider.

Nietzsche’s trainer Brian Ellison has a fine record in Irish handicaps, including winning this race three years ago with Montefeltro.

Ben Robinson takes 5lbs off Nietzsche who returned to action after a fine jumping campaign last winter with a recent run at Doncaster. He should strip significantly sharper for that and the raider looks interesting over this stiff two mile trip.

Last weekend’s Newmarket winner Bye Bye Baby is the lowest rated of the Ballydoyle team but Donnacha O’Brien takes the mount and she looks open to more improvement.

Aidan O’Brien’s principal weekend focus however will be on Saturday’s Kingdom Of Bahrain Sun Chariot Stakes at Newmarket.

Roly Poly has already contributed twice to the champion trainer’s tally of 22 Group One victories in 2017 and she appears one of the leading players for the mile highlight.

Her stable companion Alluringly is also among the 13-strong field which includes three French fillies and the likely favourite Persuasive who is set to try and break her top-flight duck on what is likely to be her final start.

Other Irish cross-channel interest on Saturday will be provided by the Bill Farrell-trained pair Xenobia and Orangey Red who line up for the Listed October Stakes at Ascot. Darren Bunyan’s Mister Trader also lines up for the Ascot opener.