Phoney war over as Leinster and Munster get ready to rumble 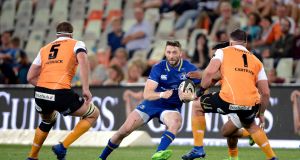 As ever, the battle that supersedes all others signals that the phoney war is over. This fixture may have lost a little of its previous edge and even some of its lustre given it’s been three years since either lifted a trophy. Yet, outside of Test rugby, there’s still no bigger rivalry in the global game.

That over 45,000 tickets have been sold confirms as much. Over the last decade, nay 17 years or so since 30,000 attended the inaugural final of this ever-changing competition, no sub-Test rivalry has consistently attracted attendances as good. And it rarely lets us down.

Clearly therefore, it’s still the Pro14 fixture that matters the most to the respective supporters and, one ventures, to the playing squad and managements as well. All of this is reflected in the selections, with all bar one of their combined eight Lions on display, the exception being Sean O’Brien.

“He got a stamp on his calf last week and went to run this week but just still has a bit of wariness there and wasn’t happy so he wasn’t considered,” explained Cullen.

This means Robbie Henshaw returns for his seasonal bow alongside his three fellow Lions, Johnny Sexton, the aforementioned McGrath and Tadhg Furlong, who should all benefit from last week’s run. James Tracy rotates with Sean Cronin, Leinster’s best carrier last week, while Josh van der Flier and Jack Conan come into the back row.

The final changes see the young UCD pair of Adam Byrne and Barry Daly come into the back three either side of Joey Carbery, which is recognition of Daly’s blistering pace and four tries in two games against Cardiff and the Cheetahs. It’s a rapid rise for an innately quick winger who didn’t come through the Academy, but caught the eye with his form for UCD and made the most of an initial trial for two weeks last season.

“Barry’s getting picked because he’s able to score tries, he deserves a window in one of these big games,” said Cullen.

“It’s a great story, from the clubs, for younger players who might miss out on academy or sub-academies, there is a way there to get through to the professional game again. It’s a great story for Barry. He’s a genuine finisher.”

For their part, Munster coach Rassie Erasmus has retained the same pack and halves from last week’s win over Cardiff, but rejigged his backline, with Tyler Bleyendaal wearing the number 12 jersey, Chris Farrell filling the void left by Jaco Taute’s long-term injury, Keith Earls – Ireland’s player of the their summer tour – making his seasonal reappearance and JJ Hanrahan handed his first start since his prodigal return after last week’s two-try cameo off the bench. Andrew Conway shifts to wing in the continuing absence of Simon Zebo.

Bleyendaal has played at inside centre in his Canterbury days, and this gives Munster three playmaking outhalves-cum-kicking options. It may be that Ian Keatley and Bleyendaal alternate as first receiver but it’s still an unusual-looking, untried combination.

It’s surprising not to see a left-footed kicking option, Rory Scannell, on the team, and consigned to the bench. At the very least it’s a tough call on him.

Neither team has hit their straps yet really. With daunting assignments in Europe – Leinster host France’s form side at the moment in Montpellier before travelling to Glasgow, while Munster travel to Castres before hosting Racing 92 – both teams need this. By the rather unseemly hour of 4pm or thereabouts, we’ll know which need is the greater.

On the evidence of last week, Munster found better form in pulling away with 26 unanswered points in the second half last week, whereas Leinster’s white line fever contributed to them not putting Edinburgh away.

Yet they were possibly only one early second-half try away from doing so. Their early-season momentum and rhythm was undoubtedly affected by their complicated sojourn to South Africa. This week, they’ll have had the nearest thing yet to a full week’s preparation with a more or less full squad, and should be the better for it.

Leinster also look to have more oomph in the pack, with potentially the better scrum and lineout, admittedly allowing for the presence of Peter O’Mahony. They also the more reliable goal-kicker and, perhaps, the better impact off the bench.

They are also at home, and have rediscovered their mojo at the Aviva which, by contrast, has become something of a graveyard for Munster, who have only won once in nine games away to Leinster since their 18-0 win in September 2008 at the RDS.

But either way, this has been the one that giveth the most. It rarely disappoints. Bring it on.

1 New PGA Tour schedule could bring an end to the year like no other
2 Man City to investigate Kyle Walker over lockdown sex party
3 Club World Cup to be proposed as alternative to Champions Cup
4 My favourite sporting moment: Donegal and Kildare’s high summer street opera
5 Cheltenham controversy will pass for magnificent triviality of horse racing
Real news has value SUBSCRIBE