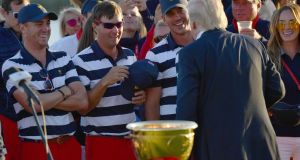 President Donald Trump speaks with members of the US team. Photograph: PA 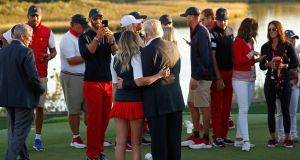 Dustin Johnson takes a photo of US President Donald Trump with his wife. Photograph: Reuters 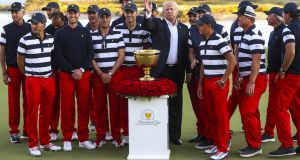 US President Donald J. Trump poses with the US team during the presentation of the Presidents Cup. Photograph: PA

After a humbling seventh successive Presidents Cup loss to the United States on Sunday it’s back to the drawing board, according to Ernie Els, the man expected to be the next International team captain.

With 12 Presidents Cups having produced a single win for the Internationals, in 1998 in Melbourne, and a draw in 2003, change would seem long overdue.

That need was highlighted at Liberty National where a young US team dominated the competition and came within one point of clinching the trophy inside the first three days as the Internationals managed just two match wins.

Els, who acted as one of Nick Price’s assistant captains, was not shy about expressing a need for change, particularly when it comes to the role of the PGA Tour, which chooses venues, team selection criteria and even the naming of captains.

Both outgoing captain Price and Els would like to have a greater say in how their squad is assembled along with tweaks to the current format.

Unable to match the depth of the US, Els suggested fewer players and matches might help level the playing field.

“I think we can go back to the drawing board with the Tour,” said Els. “Obviously playing for less points, I still say would benefit us.

“We’re playing a very deep American side, and I think less points for us.

“We play these team events every second year and the US team plays every year. So they are a little bit more, I don’t want to say prepared.

“I think to put pairings together with a very diverse group as we have, is our challenge.

“So I think less matches, less points, will be definitely beneficial to us, but we’ll wait and see, see where we go with the Tour.”

The biennial event is called the Presidents Cup, but until Sunday, the 13-year-old trophy had never been awarded to the winning team by a sitting President of the United States. The 45th president, Donald Trump, received a warm reception when he showed up at Liberty National Golf Course to hand the trophy to the US squad, despite sports across the country continuing to protest against him.

The United States sealed the deal despite a strong performance from Nick Price’s International team in the singles on Sunday.

And after Kevin Chappell had halved his match against Marc Leishman, there were wins for Daniel Berger, Phil Mickelson and Rickie Fowler as the United States went on to secure a 19-11 victory.

It was Berger who clinched the winning half-point for Steve Stricker’s side when he beat Si Woo Kim 2&1.

The US have now won the Presidents Cup 10 times out of a possible 12.

The International team restored some pride on Sunday, winning six singles matches and halving three others.