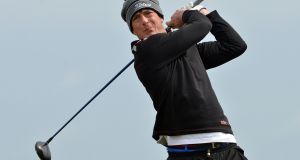 Colin Fairweather: led the Irish qualifiers for the next phase with a level-par 72 to finish tied for fifth on 284, four-under par. Photograph: Pat Cashman

Three Irish golfers made it through to the second stage of the European Tour qualifying school after top-20 finishes at Frilford Heath, Oxfordshire.

Knock’s Colin Fairweather was the leading Irish qualifier at the start of yesterday’s final round and managed to secure his place in the next phase with a level-par 72 to finish tied for fifth on 284, four-under par.

Niall Kearney (Royal Dublin) joined Fairweather on 284 after a second successive 69. Having opened the tournament with 75, Kearney improved as the competition went on and recorded an eagle and four birdies, as well as three bogeys, in the fourth and final round to ensure his journey towards a European Tour card continued.

Ballymena’s Dermot McElroy also bagged a spot in the next phase on 285 after a fourth-round score of 71, one-under par.

The trio will join John-Ross Galbraith (Whitehead), David Carey (Castleknock) and Brendan McCarroll, who all qualified from earlier tournaments, in the second stage.

But Conor O’Rourke will not accompany them as he suffered a surprise exit on 287. The Naas man started the competition well and was tied for ninth heading into the final round where a one-over 73 left him agonisingly languishing on the wrong side of the line in 21st, with only the top 20 and ties progressing.

Elsewhere Justin Thomas was named PGA Tour Player of the Year after a season that included five victories and the FedExCup title. The award was voted on by his fellow players on the PGA Tour, which does not release the vote totals.

Thomas joined an elite group including Jack Nicklaus, Tiger Woods and Jordan Spieth to have posted five wins in a season before the age of 25.

The 24-year-old’s victories included his first Major title at the PGA Championship in August. He also won the season-long points race, the FedExCup, and set an all-time tour record low score of 253 strokes at the Sony Open in Hawaii in January.

Thomas nominated his tee shot at the par-three 17th at Quail Hollow in the final round of the PGA Championship as the most special in a remarkable season.

“That shot was probably the best shot I’ve ever hit in my life under those circumstances,” he said of the seven-iron from 200 yards that cleared the water hazard, found the heart of the green, and set up a 15-foot birdie that all but clinched the championship.

Xander Schauffele was named PGA Tour Rookie of the Year. He won twice, including the season-ending Tour Championship.