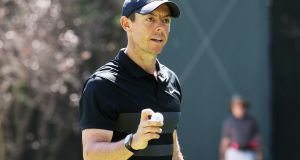 The second round of the WGC-Mexico Championship is live on Sky Sports Golf from 7pm. Photograph: Getty Images

Manchester United came from behind to claim a 1-1 draw with Club Brugge in the first leg of their last-32 tie in the Europa League last night. The home side took a 15th-minute lead after a quickly-taken goal-kick by former Liverpool goalkeeper Simon Mignolet caught the United defence napping and allowed Emmanuel Dennis to lob Sergio Romero. However, United got back on level terms after 36 minutes via Anthony Martial. Goalkeeper Fraser Forster was Celtic’s hero as they drew 1-1 away to FC Copenhagen. Odsonne Edouard’s opener was cancelled out early in the second half and the home side had the chance to win it late on only for Forster to tip Jens Stage’s penalty onto a post. There were also wins for Arsenal, Wolves, and Rangers. Tonight there are five League of Ireland matches, including newly-promoted Shelbourne’s ‘biggest test’ as Dundalk come calling.

Rory McIlroy, recently returned as the world No 1, has marched to the top of the leaderboard at the WGC Mexico Championship with an opening round 65. British Open champion Shane Lowry carded a one-over 72 in his opening round, while Graeme McDowell opened with a five-over 76. McIlroy takes a two-stroke lead over Bubba Watson and Justin Thomas in to this evening’s second round.

1 Luke ‘Ming’ Flanagan bares his bottom half to European Parliament
2 Coronavirus: Eight further deaths and 10 new cases reported in the State
3 Gardaí investigate Dublin Black Lives Matter protest over Covid-19 rule breach
4 Do I want things to go back to normal? I’m not so sure I do
5 Double Standards for Men No 253: Lynn Ruane v Paul Mescal
6 Normal People: Full-frontal nudity was not its most radical feature
7 Trump turns to bible for photo op as DC burns around him
8 Should my mam wait for house prices to drop before buying?
9 A third of arrivals in Ireland are not answering phone for self-isolation checks
10 Covid-19: Easing of restrictions ‘unlikely’ to be speeded up
11 Biden accuses Trump of fanning the ‘flames of hate’ as protests continue
12 I want to burn the stars and stripes...but I will never burn my US passport
13 Apple tax case: Four individual lawyers paid over €500,000 each
14 ‘Frustrated and angry’: Thousands march in Dublin to protest death of George Floyd
15 Coronavirus: Speed limits to be cut to 30km/h across Dublin City Council roads
16 The subtle signs that point the way towards haemochromatosis
17 Parts of Brown Thomas and Arnotts to reopen next week
18 Irish holidaymakers will not be barred from Greece when tourism restarts
19 We need to pay very close attention to what is happening in Britain now
20 What will reopened childcare centres look like to staff and to children?
21 Childcare: ‘So, you go out and take the child kicking and screaming from the car?’
22 Gary Busey: Hollywood legend, coke fiend, brain-damage survivor, spiritualist
23 Printing firm Reads secures injunction preserving Nassau Street access
24 Large gatherings reported throughout State on bank holiday
25 We should look at fundamentals rather than practicalities of reopening churches
26 Increase in membership a plus for adapting golf clubs
27 Man charged with stealing €31,000 from company account
28 Irish whiskey sales near milestone of 12m cases a year
29 Thailand attempts to lure travellers with luxurious lockdown options
30 Counselling for musicians whose incomes have ‘fallen off a cliff’
31 ESB technician who came across 10,000 kilovolt live cable awarded €83,000
32 Alex Kane: Irish Sea ‘border’ looks set to stay
33 Patricia King: There can be no going back to the old, inequitable ways
34 Future Leaving Cert exams may be influenced by ‘calculated grades’
35 Royal Portrush: Golf clubs ‘in real distress’ as eyes turn to 2021
36 Court reduces time attacker must avoid victim from 30 years to three years
37 Journalists in firing line as Trump inflames US protests
38 ‘I have a talent for justifying purchases’
39 Coronavirus: Public urged to stick with ‘tough’ restrictions to allow phase two to proceed next week
40 Brother is dragging his heels as executor of uncle’s will - is there anything I can do?
Real news has value SUBSCRIBE