Captain Johnny Sexton says that Ireland have been preparing for the best version of England in this year's Six Nations after Eddie Jones' side lost to France and narrowly defeated Scotland in a storm-hit match. Video: John Cassidy 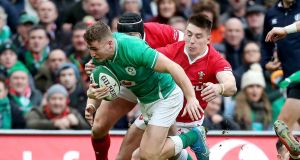 Don’t be fooled by Eddie Jones; England kick and they kick a lot; 29 times in the first half against Scotland.

However they are especially dangerous off pressurised turnovers requiring total ball protection by the Irish carrier; if not then the Irish defensive stats must be in the high 90s to survive.

Unlike Wales, England hunt hard on both sides of the ruck multiplying the pressure on the Irish attack. So the role of Conor Murray or should I say the pace of the Irish clear-out and subsequent creative Irish options afforded to Murray to unsettle the English fringe defence is mission critical.

This is all the more important as England, in losing in Paris, spent a whopping 10m 15s in the French 22 versus France’s paltry 1m 40s. In essence England had a terrible return from their dominance in the French 22. This will change especially as England’s less than three seconds ruck recycle in Paris was a brilliant 54.55 per cent of their total possession; almost impossible to defend. France managed it, but England were terribly wasteful.

So if we were to reverse engineer Ireland’s critical end product for Murray; fast physical clear-outs and creative options, who would be the ideal player to accomplish same?

My previous Friday articles focused entirely on the opposition where I opined that we were vulnerable, noting many of the Welsh dangerous aspects; their ability to hit the gainline at pace and expose the split pitch through hard, straight running.

I minimised the impact of denying Wales the ball where it took Hadleigh Parkes 12 minutes to hit the gainline with Wales enjoying just 29 per cent of possession in the opening half hour. This was a marvellous performance from Ireland, the reward from denying Wales possession was a bonus point Six Nations win.

Hence in reverse engineering Sunday’s end product would you prioritise skills or ‘dog’ on the Irish team?

England have problems – who doesn’t – and they are not the same recent team that beat us with ease. That said, can we expect to limit them to 29 per cent of possession in Twickenham’s opening 30 minutes?

And what can we do to maximise 71 per cent possession of the ball? When the blood is up, denying is the easier of the two to get right and Ireland will maximise this aspect of their game. Hence we are still vulnerable whilst progressing the balance between physicality, creativity and winning.

A key player in this has been Jordan Larmour. His try against Wales was ridiculous in how Wales defended; but his role, still crude, is evolving brilliantly. His blindside bouncing feet will create opportunities and tackles will be missed but in time as the team unity evolves this second pivot will become extremely dangerous.

Sunday is a good time to use Larmour as a high-quality decoy as Eddie Jones will be sweating on Larmour’s new role and resource the defence accordingly. Larmour can distract England while others flourish.

So, what players have the physical ability and creativity to aid the attack? I’ve been banging on about Caelan Doris and Max Deegan as footballing options very comfortable across the 70 metres.

In time, add to them Munster’s John Hodnett; still a child but dominated a terrible Southern Kings last Friday evening and certainly has the old school openside allied to explosion out of the traps. The back row is fast becoming more and more creative without the physicality diminishing. The creative/physique ratio if you like; with selection headaches coming down the tracks. CJ Stander has been immense these past weeks where back row balance still suggests a move to number six.

For too long our elite secondrows have been forgiven for their creative limitations. Think Brad Thorn and then think of Tadhg Furlong and what the Irish rugby public expect of him creatively whilst he battles the toughest position in world rugby; tighthead.

Our secondrows need to contribute more such as when Ireland employ their sliding attacking ploy options and must sell their carry allied to a varied passing game to confuse the English defence. This is a very difficult skill to perfect but players like Alun Wyn Jones are most comfortable in executing same. Heavy traffic secondrows are vital on Sunday but the real opportunity comes from rugby knowledge and skills in opening space for others.

Our midfield is another area where the balance of possession is being positively recalibrated in their favour. Garry Ringrose is that creative force and in his absence Robbie Henshaw found plenty of space and offloads.

Andy Farrell looks like favouring Bundee Aki with Ringrose so where do Henshaw, Chris Farrell and Stuart McCloskey figure? Farrell was industrious for Munster against the Kings last Friday but can either Farrell or McCloskey add top end passing to their obvious monster frames. If yes, then Ireland will benefit hugely.

When analysing England do we look at an error-prone Parisian loss or an emboldening win in Edinburgh. Unfortunately, there’s much more to fear from England in Paris and I expect Sunday to become a real mental and emotional contest with 30 players battering each other at ferocious pace and where the subtlest of skills will win the day.

We can’t expect it to come exclusively from Larmour, others must provide. And if so, regardless of the result, our trip to Twickenham will be a most beneficial reordering of the ratio of creativity and physique.