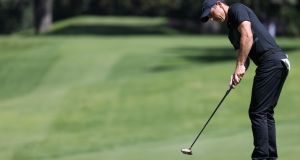 Rory McIlroy putts on the 13th green during the first round of the WGC Mexico Championship at Club de Golf Chapultepec in Mexico City. Photograph: Rob Carr/Getty Images

The day after making an emphatic statement off the course, Rory McIlroy did precisely the same when back on it. Evidence of an excellent start to 2020 is provided by a McIlroy scoring average of 68.5 from nine rounds, two of which were 73s.

McIlroy, recently returned as the world No 1, marched to the top of the leaderboard at the WGC Mexico Championship with a 65. Whereas on Wednesday, McIlroy created shockwaves by vehemently dismissing plans for a breakaway tour, Thursday he successfully returned to his natural domain.

McIlroy made a birdie at the ninth, his 18th, from nine feet to take a two-stroke lead over Bubba Watson and Justin Thomas. His highlight of a six-under-par round had come much earlier: at the 11th, his second, he played a glorious four-iron from 274 yards to within 15ft. A converted eagle putt followed. It remains early in the year – and the event – but the indications are McIlroy is back to his best.

“I like this place, like the golf course, and have always played well at altitude for whatever reason that is.

“I putted a little better today than at Riviera last week and took advantage of how I drove the ball,

McIlroy switched putter, back to the one he used in 2019, following last week’s Genesis Invitational. So far, so good on that front.

McIlroy admitted he had received “nice messages” over his Premier League stance. “I wasn’t hoping for anything,” he said. “I was just sort of providing my point of view and getting it off my chest. That’s what I felt. I wasn’t trying to do anything or prove a point or try to get any sort of praise. I’ve sort of been sick of talking about it for the last few months and I’m happy that everyone knows where I stand on that. I’m happy that I know where I stand, certainly, on it.”

Tyrrell Hatton, in his first start of the year, signed for a 69. The Englishman has been battling a wrist injury since completing his European Tour season in Dubai last November. “It’s still not 100 per cent to be perfectly honest,” he said. “I’ve still got a little twinge there but I’m hoping that now I’m back playing, it’ll ease up. It is just going to take time. The recovery was a bit longer than we thought it would be. This week is a good test for it, give myself four competitive rounds and see how I feel at the end of it.”

Paul Casey matched Hatton’s score, as did Lee Westwood. Tommy Fleetwood, playing in the company of McIlroy, recovered from a sluggish start to post 70.

British Open champion Shane Lowry carded a one-over 72 in his opening round, while Graeme McDowell opened with a five-over 76. - Guardian