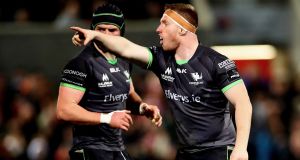 Connacht’s Shane Delahunt will be in action against Edinburgh on Friday. Photograph: James Crombie/Inpho

Connacht are facing a challenging task when they face Conference pacesetters Edinburgh in Friday evening’s Pro14 clash at Murrayfield.

The top-of-the-table Scottish side is without nine internationals who are on Six Nations duty, but with or without them, Edinburgh coach Richard Cockerill continues to develop a gritty squad that he says is prepared to win ugly.

This is the second of three fixtures Connacht coach Andy Friend has targeted in a bid to move his team back into the top three – they currently lie fourth in Conference B, eight points adrift of the top.

Last weekend’s 29-0 victory over Cardiff ensured Connacht put some distance between themselves and the Welsh outfit in fifth place, but to catch up to Munster and Scarlets, an away win would be a huge boost at this juncture.

After last weekend’s much-needed win, Connacht will travel with a lilt in their step, but Friend knows Edinburgh at home are a different prospect to Cardiff.

“We put in a good performance against Cardiff, but we know there are still areas for improvement,” he says.

Friend’s hand has been limited this week due to players being in the Ireland camp, and neither Dave Heffernan, man of the match against Cardiff, nor Ultan Dillane has been released despite Connacht’s request. Add in a fresh injury to key line-out stealer Gavin Thornbury, and the ongoing recovery of Quinn Roux from hand surgery, and Friend has been forced to select a new secondrow pairing in the former Leicester Academy lock Joe Maksymiw and Niall Murray, the talented former Roscommon minor footballer who was handed his debut against Leinster. More changes to the front five include hooker Shane Delahunt for Ireland-tied Dave Heffernan, with Tom McCartney also sidelined with a continuing hip issue, while Denis Buckley replaces Paddy McAllister, who moves to the bench.

Cockerill, too, makes a handful of changes. Simon Berghan strengthens their front row, having been released from Six Nations duty, while lock Stan South, on loan from Exeter, will make his debut alongside the talented and versatile Lewis Carmichael. Cockerill has also opted for a new halfback pair in South African Nic Groom, who captains the side, and former Blues and Baby Blacks playmaker Simon Hickey.

The challenge for Connacht will be to follow up last weekend’s superb win. Both backlines have the ability to test defences at Murrayfield – Connacht will need to mind Edinburgh’s Duhan van der Merwe, current top try scorer, while looking to Jack Carty to put them in position and John Porch to exploit any space – but the battle could be won up front.