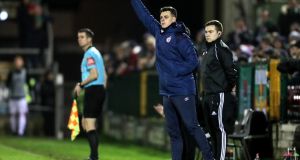 Ian Morris: “Dundalk have been up at the top for the last few seasons and that’s clearly for a reason but we’ve looked closely at them and tried to identify areas that we can attack them.” Photograph: Laszlo Geczo/Inpo

They may be some way off competing for championships again but Ian Morris insists that his Shelbourne side will set out to compete with the champions at Tolka Park on Friday night with the home side’s manager adamant that his side will “play on the front foot,” after beating Cork City away in the opening game of their first season back in the top flight.

“We’re delighted with the win last week although I’m not claiming that that tells us anything about the season as a whole,” says Morris. “Cork City will improve and we still have to see about most of the other teams.

“Dundalk have been up at the top for the last few seasons and that’s clearly for a reason but we’ve looked closely at them and tried to identify areas that we can attack them in and that’s the intention. We believe we can compete with them; we want to take all three points.”

Still, he admits, this could well be his side’s “biggest test of the year”.

Ciaran Kilduff got the winning goal last week and may well have to pull something out of the bag again against his old side if the hosts are to actually win but the first requirement will be to contain a Dundalk attack that looked like it was working its way up through the gears last Friday night when Vinny Perth’s team eventually secured all three points thanks to a close range conversion by Dane Massey following a second-half corner kick.

The visitors are set to be without Sean Murray and John Mountney again while Pat McEleney and Georgie Kelly face fitness tests after having also missed the Derry game.

After their dramatic victory against cross city rivals Bohemians, Shamrock Rovers are at close to full strength for the visit of Cork City to Tallaght. Sean Kavanagh is still out after having undergone a close-season knee operation but Joey O’Brien and Rhys Marshall are both said to be fit and available.

Finn Harps were one of the other sides to secure a narrow win on the opening weekend and so they take a little bit of momentum into the season’s first derby game against Derry City. Ollie Horgan’s side lost three times there last season, conceding 10 goals in the process and the manager says he and his players will travel “more in hope than expectation,” on this occasion. Still, they will be eager to cause an upset.

Mark Timlin is out, Raff Cretaro is a doubt and Adrian Delap is unavailable to play against the club that loaned him to Harps. For the home crowd it will be the first real opportunity to size up all of their new signings in a competitive environment and after a strong showing at Oriel in what were unpromising conditions, much interest will focus on whether Tim Nilsen can do more than just pose a threat against a side that might be that bit less resilient at the back.

Liam Buckley is concerned that his Sligo Rovers side will be handicapped in that department as they go into a game against St Patrick’s with four defenders injured. Danny Kane, John Mahon, Regan Donelon are all out while Lewis Banks is considered a major doubt. The Dubliners are expected to have a full squad.

Will Longbottom has joined Waterford from Doncaster Rovers ahead of their first home game of the season with local teenager Jack Larkin also moving into the senior squad. Bohemians will be without Andy Lyons for the game against the Blues due to suspension.