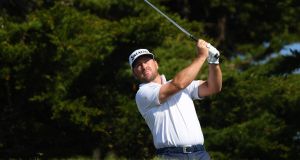 Graeme McDowell: “It’s important for me if I have aspirations of being in the Ryder Cup team that I’ve got to be in the WGCs and major championships.” Photograph: Harry How/Getty Images

Graeme McDowell is relishing his first World Golf Championship (WGC) event since 2016 as he looks to book a Ryder Cup return.

McDowell’s victory in the Saudi International at the start of the month lifted the former US Open champion into the top 50 in the world rankings, and secured his place in this week’s WGC-Mexico Championship at Chapultepec Golf Club.

The 39-year-old also currently occupies an automatic qualifying place for September’s Ryder Cup against the US at Whistling Straits, having missed out on playing in 2016 and 2018.

McDowell was a vice-captain under Thomas Bjorn in Paris, and would be expected to perform the same role for Padraig Harrington this year. However, he would rather play than be a member of the backroom staff.

“I’ve played a lot of WGCs in my career, and I think you do take them for granted a little,” McDowell said. “They are amazing tournaments when you get the best players from all over the world to come together here in Mexico.

“It’s the first time seeing the golf course for me and it’s a great track; reminds me a little of Valderrama. And obviously you’ve got the altitude so the ball goes a long way. But I’m excited to be back in these WGC events.

“It’s important for me if I have aspirations of being in the Ryder Cup team that I’ve got to be in the WGCs and major championships. So it’s really important to take that first step, to get my schedule to where it needs to be, and, hopefully, I can kick on from here.

“We’re here to do a job this week. This is certainly not some icing on the cake from the win out in Saudi Arabia. This is about kicking on into the rest of the season, and using these events as platforms to get where I want to be.”

Open champion Shane Lowry, who won the WGC-Bridgestone Invitational in 2015, has made qualifying for a Ryder Cup debut one of his priorities for the season, and comes into the week on the back of three top-15 finishes from four events.

“I’ve had a nice couple of weeks off,” Lowry said. “I had four weeks in a row at the start of the year so it’s a long four weeks when it’s the first run of the year.

“I felt like I played okay in Dubai and Saudi, and I’m happy to be over here now, in Mexico this week and in the USA for the next couple of months. And hopefully I can put in a few good performances.

“I wouldn’t be overly-optimistic but I never usually am, and I try to come in under the radar and do my thing for the week. Hopefully I can pop up on the leaderboard come Saturday afternoon and give it a run on Sunday.”

Tottenham give 550 non-playing staff a 20 per cent pay cut 12:02
Sky Sports customers save on bills; rule changes could change rugby utterly 07:25
Uefa meet to re-evaluate hopes of finishing current season 06:48
Gerry Thornley: Changes to tackle laws could transform rugby by time of next World Cup 07:18
Five newly-released sports books to read over the coming weeks 07:31
Here is your handy guide to sport on television this week