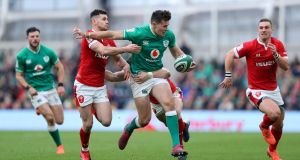 Jacob Stockdale has impressed so far in this year’s Six Nations with some trademark big carries. Photograph: Warren Little/Getty Images

Age: 22
Height: 5’ 10”
Weight: 87kg (13st, 7lbs)
Caps: 23
Combined with his outside backs well to run the ball against Wales, his choices when to do having improved from the opener against Scotland. Balance and footwork a main attacking threat.

Age: 28
Height: 5’ 11”
Weight: 90kg (14st, 2lbs)
Caps: 20
One of his most complete games for Ireland last time out. Showed a suite of skills in tackling, taking the high ball, kicking and running at the opposition. A crowd favourite for bravery too.

Age: 26
Height: 6’ 4”
Weight: 105kg (16st, 6lbs)
Caps: 42
Was arguably Ireland’s standout player until suffering a head injury against Wales. He punched through all over the park with pitch perfect layoffs and drew players in allowing Ireland attacking width.

Age: 29
Height: 5’ 10”
Weight: 92kg (14st, 5lbs)
Caps: 25
England will be a different type of physical challenge for a physical centre. Also came away from the Wales game with his reputation intact. Worked well with Henshaw outside, carried well and attacked space.

Age: 23
Height: 6’ 3”
Weight: 103kg (16st, 3lbs)
Caps: 27
A dangerous player when he’s up the gears. Got a chance to do that against Wales and added an almost perfect chip and run. He also stayed in the game throughout. Same again needed.

Age: 34
Height: 6’ 2”
Weight: 92kg (14st, 5lbs)
Caps: 90
He has regained the control of his game and a lot of that clicks into place when his kicking is sweet. Against Wales that was apparent with the addition of a physical side to his game that has never failed him.

Age: 30
Height: 6’ 2”
Weight: 93kg (14st, 7lbs
Caps: 80
He is coming back to form. Hallelujah. But maybe not totally there yet. Box kicking last time was not always tight. But his defending and command at breakdown and behind the scrum were excellent.

Age: 32
Height: 6’ 1”
Weight: 117kg (18st, 4lbs)
Caps: 97
Because of how good he is the feeling is Healy can give more. He probably doesn’t carry with the same power and ferocity but made a big contribution for the 50 or so minutes he played against Wales.

Age: 29
Height: 6’ 1”
Weight: 102kg (16st)
Caps: 10
No doubt, a willing and hard worker around the park. Maybe he’s looking for a little more dynamism and to curb the odd handling error. Rónan Kelleher is gunning for a longer run and will keep the pressure on the Ulster player.

Age: 27
Height: 6’
Weight: 122kg (19st, 3lbs)
Caps: 42
Impressive in the last two games with his extraordinary work rate and willingness to take on difficult carries and succeed. Dynamic and involved, he has rediscovered the form of old.

Age: 33
Height: 6’ 11”
Weight: 127kg (19st, 11lbs)
Caps: 69
The big man from Meath comes in at late notice after Iain Henderson was ruled out for family reasons on Friday. Toner has not started a game for Ireland since the World Cup warm-up win over Italy last August, but has replaced Henderson in the final stages of both games so far in this year's championship. Will strengthen Ireland at the lineout and add a bit more bulk at scrum time.

Age: 27
Height: 6’ 8”
Weight: 107kg (16st, 9lbs)
Caps: 25
Wasn’t expected to sustain levels that characterised his earlier games for Ireland. But he has. A tireless competitor with good hands, he made 15 tackles and 14 carries against Wales.

Age: 31
Height: 6’ 3”
Weight: 107kg (16st, 9lbs)
Caps: 66
Many were affronted by his original demotion to the bench. But maybe it has been his making. Against Wales he tackled and tackled and was classically a nuisance at the breakdown. Welcome back.

Age: 26
Height: 5’ 11”
Weight: 107kg (16st, 9lbs)
Caps: 25
Watch his work rate and see a player who does not flag. He has great line speed, enough to pressure backs and he is excellent at the breakdown and in support of ball carriers.

Age: 29
Height: 6’1”
Weight: 114kg (17st, 11lbs)
Caps: 40
Against Scotland 17 carries, 15 tackles and the match-saving turnover. Like O’Mahony he has reacted well to pressure. No longer always the crash tackle but a more nuanced game with more passing involved.