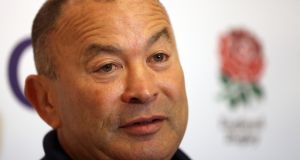 England head coach Eddie Jones has apologised for a bizarre remark in which he appeared to insinuate to a reporter that they thought all half-Asians looked the same.

The comment came towards the end of the latest in a series of fractious press conferences between England’s coach and the media before Sunday’s Six Nations match against Ireland at Twickenham.

Jones had initially given a thoughtful response when asked about how he looked after his players’ mental health in the wake of Caroline Flack’s death, paying his respects to Flack’s family before pointing out that England had an “individual way of looking after each player as well as we can”.

But when the reporter followed up with a question on how meditation had helped him, on the back of comments Jones had made about mindfulness during the summer, the England coach became more spiky.

“I don’t think I’ve ever spoken about meditation,” he said. “You must be thinking about someone else – maybe another half-Asian person.” Then, smiling, he added: “Maybe we all look the same.”

After the press conference ended the reporter concerned immediately sought an apology – and was quickly given one in private by Jones. An RFU spokesman later added: “Eddie made an off-the-cuff comment during the press conference which was not intended to cause any offence. He has subsequently spoken to the journalist privately explaining this and apologised, which was accepted.”

Relations between Jones and the media have been strained ever since the press suggested that the England coach had given France ammunition with some of his comments before the first match in the Six Nations.

It is also not the first time Jones has caused controversy. Two years ago Jones apologised after a video emerged in which he referred to “the scummy Irish” and Wales as a “little shit place” during a speech. At the time Jones said he was “very sorry” for remarks which he conceded were inexcusable. – Guardian

Seán Moran: What nostalgia tells us about how the GAA sees itself 06:20
Dr Claire Molloy: ‘It is a privileged place to be, on the frontline’ 06:00
Six Nations rugby needs to be protected for terrestrial TV 06:00
My favourite sporting moment: Game, set and couch as Borg takes down McEnroe 06:00
Garry Ringrose to stay with Leinster as he signs two-year central contract 00:00
Here is your handy guide to sport on television this week