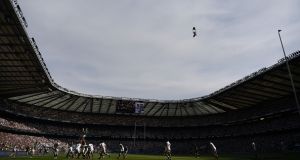 Ireland’s previous visit to Twickenham did not go to plan, but expectations are high ahead of Sunday’s clash. Photograph: Getty Images

After a well deserved week off, the Six Nations returns this weekend, and Ireland are faced with the small matter of a trip to play England at Twickenham.

This fixture was pencilled from the outset as make or break – a game which could end Ireland’s hopes of winning the Championship or one which could tee up a title charge.

And it’s turned out to be the latter. Andy Farrell’s side are two from two after they followed their opening win over Scotland with a convincing 24-14 victory over Wales in Dublin two weeks ago.

That performance against the defending Grand Slam champions was arguably Ireland’s best since their win over the All Blacks in 2018, and saw them finally use the full width of the Aviva pitch and let their back three off the leash.

If you had offered most Ireland fans a Triple Crown ahead of the tournament chances are they would have snapped your hand off – and that’s what is on the line in London this weekend.

England were stunned by France in their Championship opener before steadying the ship with a messy 13-6 win over Scotland in foul conditions at Murrayfield last time out.

They are missing some frontline players but memories of 2019 are fresh – Eddie Jones’s side bullied Ireland twice last year, and have home advantage for this defining clash.

There’s a huge amount riding on this fixture for both sides – as well as the usual bragging rights. Here is everything you need to know.

Ireland travel to take on England at Twickenham in their third fixture of the 2020 Six Nations Championship.

(all matches live on Virgin Media One, UK channels listed after each game)

How do things stand going into the weekend?

Virgin Media One are showing all of this year’s Six Nations fixtures in Ireland, while if you fancy a change of scene you can also watch the match on ITV. The Irish Times liveblog will also be live from around 2.15pm, with Sunday’s fixture taking centre stage.

For Ireland it’s a case of so far, so good, as they followed up an opening 19-12 win over Scotland with an impressive 24-14 conquest of Wales. Talk of a Grand Slam is incredibly premature but only Andy Farrell’s side and France – who followed up their win over England with another against Italy – are still on course for a clean sweep. England and Wales have both been beaten once, and know victories this weekend will blow the Championship wide open. As for the winless Scotland and Italy, both will see Saturday’s clash in Rome as their best chance of a victory.

Having initially named an unchanged XV for Twickenham, Ireland head coach Andy Farrell was forced to make a change on Friday after Iain Henderson was ruled out due to the birth of his son. Devin Toner steps up for his first start since last August's World Cup warm-up win over Italy, but has come on twice for Henderson in the two games to date and with 70 caps under his belt, Ireland won't skip a beat with his introduction. Ultan Dillane steps up to the bench.

England have been boosted by the return of Manu Tuilagi and Henry Slade to their matchday squad. George Furbank's injury forces changes in the back three with Jonathan Joseph filling in on the left wing and Elliot Daly starting at fullback. Mako Vunipola will miss the clash for family reasons.

Given its status as one of the more daunting places to visit in world rugby, Ireland’s recent record at Twickenham is actually quite positive – in their last 10 visits (dating back to 2004) they have won four. Ireland’s last trip to London saw them hammered 57-15 in a Rugby World Cup warm-up last August, but Joe Schmidt’s side were drifting badly in the lead up to that fixture. Instead they might take inspiration from March 2018, when they clinched a Grand Slam in the snow thanks to a storming 25-14 win.

Ireland are bidding for a 12th Triple Crown, which would be regarded as a very good return for Farrell’s first Championship in charge. Schmidt managed just one in 2018, despite securing back-to-back Six Nations titles in 2014 and 2015 – a nod to how difficult it is to beat England, Wales and Scotland in the same year.

How about for the tournament?

Will there be a Grand Slam winner?

Nope – and even if there were, you need to be an England RFU member in order to buy one.

Sunday is set to be mild – 14 degrees – and wet. No sign of the latest storm just yet.

Diego Maradona: Five memorable moments 21:16
Keith Duggan: Through the glories and the disgraces, we were all Maradona addicts 20:30
Manchester City cruise into last 16 with win in Greece 20:29
Rapid Vienna v Dundalk preview 20:27
Andy Farrell to delve deeper into Irish squad for team to play Georgia 19:42
Crossword Get access to over 6,000 interactive crosswords