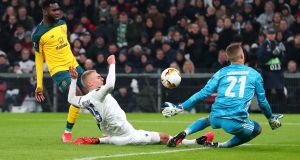 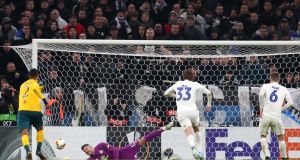 Fraser Forster saved a VAR-awarded penalty as Celtic fought out a 1-1 draw with FC Copenhagen in their Europa League last-32 tie in Denmark.

On a perishing night in the Parken Stadium, French striker Odsonne Edouard missed a couple of early chances before scoring with his third opportunity in the 14th minute, his clever finish taking his tally for the season to 25.

Neil Lennon’s side had controlled the game until the break but the home side responded and 34-year-old Senegal striker Dame N’Doye levelled in the 52nd minute.

In what was Celtic’s first experience of VAR in a competitive game, there was drama after Russian referee Sergei Karasev used a pitchside monitor to give Stale Solbakken’s men a penalty in the 78th minute for a Ryan Christie hand ball – his yellow card meaning he misses the return at Parkhead.

Forster came to his rescue to tip Jens Stage’s penalty onto a post and away, leaving the tie finely balanced heading into next week’s second leg.

Lennon made three changes for another big European night for the Scottish champions. Teenage right back Jeremie Frimpong made his European debut and on the other flank Ireland international Jonny Hayes came in for injured left back Greg Taylor.

Christie took over from Leigh Griffiths, who was left behind in Glasgow with a niggle, and less than a minute had been played when he sent Edouard clean through on goal.

However, the 22-year-old’s shot was blocked by home goalkeeper Karl-Johan Johnsson, with defender Victor Nelsson blocking Edouard’s next effort from a tight angle and the ball ricocheting out for a goal-kick.

It was an encouraging start for the visitors and the 3,000 or so Hoops fans packed behind the goal were soon celebrating when midfielder Callum McGregor took a Christie pass and moved the ball on to Edouard who this time dinked the ball over Nelsson and Johnsson from 10 yards for a deserved opener.

Celtic controlled the tempo but the home side had a chance in the 31st minute when Bryan Oviedo drove in from the left but missed the target with a shot as unconvincing as his side’s first-half performance.

Copenhagen raised the tempo after the break and after Ntcham was caught in possession outside the box, Rasmus Falk played in N’Doye and he flashed a shot from 12 yards past Forster and in off the post. The match was up for grabs.

McGregor fired high over the crossbar at the end of a swift Hoops break, before Mohamed Elyounoussi replaced Ntcham.

In the 70th minute, Edouard stabbed a Hayes cut-back at goal from eight yards but Johnsson blocked with his foot.

There was drama when referee Karasev went to the pitchside monitor to look at a penalty claim on Christie, and even more drama when Forster got his fingertips to Stage’s penalty to keep it out with the help of the woodwork.

Celtic will be favourites to make the last-16 but they will have Forster to thank if they succeed and only themselves to blame if they do not.