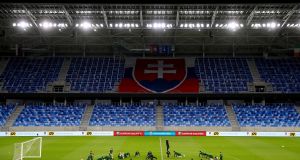 Ireland take on Slovakia in the Tehelné Pole Stadium in Bratislava at 7.45pm. Photograph: Inpho

In only his third game in charge Stephen Kenny’s Ireland team are away to Slovakia for tonight’s Euro 2020 playoff semi-final, in a match that may well be remembered as one that defined his time at the helm. In his match preview and team prediction, Emmet Malone explains: “crucially, the message has been that Kenny wants his players to be brave. That is absolutely key to the philosophy that earned him this job but it is also to be flung back in his face if things go poorly.” It took five attempts to win one and there’s been more heartbreak than joy down the years, but from brawls to handballs Mary Hannigan has compiled the complete guide to Ireland’s playoff history. Also in playoff action tonight, Bosnia and Herzegovina host Northern Ireland with the winner facing either Ireland or Slovakia next month with a place at next summer’s rescheduled European Championships up for grabs. Northern Ireland captain Steven Davis believes they must draw on their “big game experience” to preserve hopes of reaching a second successive European Championship and avoid the heartbreak of their 2018 World Cup playoff defeat.

Hugo Keenan and Shane Daly are in line for Ireland call-ups this morning when head coach Andy Farrell unveils his squad for the rearranged Six Nations games at home to Italy on Saturday fortnight and away to France a week later. Gerry Thornley also expects young Munster scrumhalf Craig Casey to be involved in some shape, as well as Leinster secondrow Ryan Baird, at the expense of the likes of Devin Toner and Luke McGrath. In his column this morning, John O’Sullivan explains that Munster’s breakthrough outhalf Ben Healy, “may be viewed in some quarters as the shiny new thing but he needs and should be given room to breathe as a player. The 21-year-old is not the second anybody and shouldn’t be smothered by that expectation.” He has put together a list of the 11 Irish number 10s we need to be keeping an eye out for over the coming months.

1 When Anthony Clare met ‘calculating, disturbing’ Jimmy Savile
2 Seán O’Brien: Anger over my parents’ break-up never left me
3 Sacha Baron Cohen: ‘I had to ring the alarm bell and say democracy is in peril’
4 Two hundred Irish retailers for all your online Christmas shopping
5 Couple found guilty of murdering Irish dancer with ‘devil’s breath’ drug
6 The baby black market
7 US election: Trump visits battleground states as Covid-19 numbers surge
8 Jennifer O’Connell: No transparency behind swerve into severe lockdown
9 We need to reverse our thinking on lockdown
10 Further anti-lockdown protest held in Dublin city centre
11 How to cosy up your outdoor space this winter
12 Gardaí find ‘fully operational bar’ after visiting suspected shebeen
13 Tanya Sweeney: I wish I’d kept my naked pics. I feared they’d end up in the ‘wrong hands’
14 Covid-19: Taoiseach warns ‘bumpy roads ahead’ as 859 cases and four deaths reported
15 Dermot Bannon: ‘I used to win Lego competitions ... but I lied about my age’
16 How Terence MacSwiney’s death led to estrangement between his wife and daughter
17 Hugo Keenan and Will Connors: The best of friends, the best of debuts
18 ‘I’m sleeping with my ex-boyfriend and want him back – but don’t want to scare him off’
19 David McWilliams: Lockdown decision makers still get paid. Those they shut down do not
20 Life under Level 5: Where can I go, who can I see, what is closed and what is open?
21 Q&A: Mother and Baby Homes Commission database
22 Late Late Show: In Covid-19 Ireland, Tony Holohan is bigger than Bruce Springsteen
23 Strengthen your muscles without leaving the house
24 Why Waterford is ‘the best Covid county in Ireland’
25 Homeless woman’s courage praised as man jailed for sexual assault
26 Cab investigates behind the massive gates of Chosen Few Motorcycle Club in Dublin
27 Ireland 50 Italy 17: Ireland player ratings
28 Mother and Baby home survivor: ‘My identity, heritage and culture was taken from me’
29 Roddy Doyle’s Nurse – an exclusive new short story
30 Sophia Loren: ‘I never had a relationship with my father’
31 France recalls Turkish envoy after Erdogan claims Macron needs mental help
32 Borat 2: Rudy Giuliani’s trouser-reaching scene is the work of a daring young woman
33 Rock’ n’ wool: Irish knits come in from the cold
34 Sinn Féin’s stand on Covid is facing increasing questions from political rivals
35 Fintan O’Toole: Donald Trump’s campaign has a joyful new message – ‘I’m alive!’
36 Trauma of adoption saga outlined in court judgment
37 A special family recipe for fruit crumble
38 Phil Hogan has reason to be aggrieved over von der Leyen’s Covid quarantine trip
39 Putting the clocks back: Sleep experts question benefits of not changing time
40 Covid-19: Over a million units of recalled hand sanitiser sent to health facilities
Real news has value SUBSCRIBE