‘We’ve to adopt the mentality - we’re playing, there’s a championship up for grabs’ 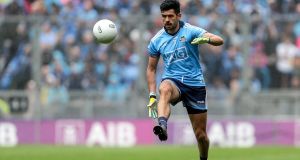 Cian O’Sullivan: “I used the time well to shore up a couple of injuries that had been nagging and hindering me the last couple of years,” Photograph: Laszlo Geczo/Inpho

There have been plenty of mornings during his now dozen seasons with Dublin when Cian O’Sullivan has woken up with questions swirling around in his head. Will I make the starting team for Sunday? What is that pain in my left hamstring? How many Leinster titles have I won again?

So in ways any lingering question around the 2020 championship, and whether or not Dublin will get as far as that shot at a sixth successive All-Ireland win, is just another of the imponderables that O’Sullivan is well used to. Even in the face of the unprecedented Covid-19 that’s the only way he can see things for now.

“From a pure football perspective, it takes a lot of sacrifice and commitment to play at this level,” says O’Sullivan, who last year won his seventh All-Ireland, to go with his nine Leinster titles. “And if you’re going to do that, you do it right, and don’t go into it with any level of doubt over whether or not it might go ahead over the coming weeks. That would be doing a disservice to that level of commitment that is required of you.

“So we’re very much planning, and focused, with the mindset that this is going ahead, and we’re going to be playing championship football on November 5th, and we’re approaching all our training sessions that way.

“Whether or not that’s the reality is completely out of our hands and our control. We can only impact what we can do when we show up for training every day, and we’ve got to adopt the mentality that we’re playing, and there’s a championship up for grabs here.”

Even if the country had gone into Level 5 restrictions, there is a growing sense the GAA are intent on playing out this championship come what may, even if it spills over into 2021. While the uncertainty will continue to linger, O’Sullivan’s insists it’s no different to controlling the things only players can control.

“Yeah, players are faced with adversity in lots of different guises and forms, and I think being involved in sport at a high level, for me personally anyway, has taught me things that you can take to other aspects of your life, dealing with adversity, and being comfortable with what’s in your control and what’s not in your control. And this is another of those examples.”

At 32, he’s intent himself of making the best of it with Dublin: speaking at the launch of the Ballygowan partnership with Dublin GAA, he also says his body has been well served by the extended break.

“Yeah I feel great, feel fresh, and really enjoyed the club campaign, being able to commit and focus 100 per cent on that, which was different to previous years, when you’re coming off the back of a long intercounty season, and the body mightn’t always be right.

“We could hit the ground running from day one, but back with Dublin two and a half weeks now, and it’s really coming together, the training sessions getting more intense, so it feels like normal again. Albeit we’re training under lights and in the rain and muck, whereas we’d usually be training on a nice hard sod and under a bit of sun.

“In the club championship too, we got to the semi-final [with Kilmacud Crokes], played most of those games, and the body felt good. Back training now, but I think the rest over the summer was definitely welcomed, and I think I used the time well to shore up a couple of injuries that had been nagging and hindering me the last couple of years.

“I do think it’s an even playing field across all counties, everyone has been struggling with the same issues, the reduced contact time, shorter pre-season, lack of competitive games. We’re no different.

“So I think across the board everyone will be welcoming the two league games, as a primer, before we get into championship. But I wouldn’t think it’s any disadvantage for us, given it’s the same for everyone else.”

1 Seán O’Brien: Anger over my parents’ break-up never left me
2 Six Nations - Ireland v Italy: Kick-off time, TV details, team news, standings and more
3 Ireland out to make a bold statement of intent against callow Italian side
4 Andrew Porter: 'There’s not a day goes by when I don’t think of her'
5 Disciples of Brian Cody spreading the word
Real news has value SUBSCRIBE