Brawls to handballs: The complete guide to Ireland’s playoff history 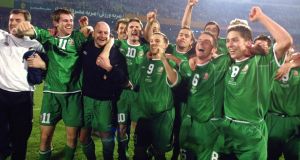 Ireland players celebrate after qualifying for the 2002 World Cup after their playoff against Iran in Tehran. Photograph: Atta Kenare/AFP via Getty Images

Ireland’s first ever playoff was a peculiar affair, comprising, as it did, of three games against the reigning European champions. A Spanish own goal had given Ireland a 1-0 win at Dalymount Park, but they were trounced 4-1 in the return leg in Seville. But at that stage aggregate results didn’t count, so a third game was required to settle the tie. The FAI, no strangers to controversy even back then, turned down the option of playing the game in London after the Spanish FA offered them the gate receipts if it was staged in France. As a result, Spain had the bulk of the support in Paris, although it still took them 80 minutes to get the winning goal through Jose Ufarte.

In what proved to be Jack Charlton’s final game in charge, two goals from teenage striker Patrick Kluivert decided the playoff at Anfield. Ireland were weakened by the absence of the injured Roy Keane and Steve Staunton and the suspended Niall Quinn, and were hit again when Andy Townsend limped out of the game soon after half-time, but despite the Netherlands’ superiority it wasn’t until the 88th minute that Kluivert sealed their victory. The fond farewell given to a tearful Charlton at the end by the huge Irish support was the most vivid memory from the night.

Having finished 10 points behind Romania in their qualifying group, in what was Mick McCarthy’s first campaign as manager, Ireland were left needing to beat Belgium in the playoffs to make it to France ’98. Luc Nilis proved to be the heartbreaker, equalising for the Belgians in Dublin after a Denis Irwin free-kick had given Ireland the lead, before getting the winner in Brussels after Ray Houghton had cancelled out Luis Oliveira’s opener. It was both Houghton and Andy Townsend’s last appearance for Ireland.

Turkey won on away goals.

A calamitous equaliser for Macedonia by Goran Stavrevski seconds from time in Skopje had cost Ireland automatic qualification for Euro 2000, Yugoslavia finishing a point clear at the top of the group. Turkey, then, were the playoff opponents, another late goal, this time Tayfur Havutcu’s 83rd-minute penalty that snuck a 1-1 draw in the first leg in Dublin, proving to be the decisive score in the tie. A 0-0 draw in Bursa, which ended with the mother of all brawls, saw the Turks go through to Euro 2000, which was co-hosted by the Netherlands and Belgium.

Hallelujah, Ireland finally won a playoff – at their fifth attempt. Although it’s probably best remembered for Roy Keane’s non-appearance in the second leg and how his absence became something of an issue when the team landed in a place called Saipan the following year. A well-deserved qualification, though, having finished level on points with Portugal in their group and ahead of the Dutch. After a 2-0 win in Dublin, Mick McCarthy’s side survived a decidedly hostile trip to Tehran where the second leg was played in front of a crowd of 100,000. Iran pulled a goal back at the death, but Ireland survived.

It was 0-0 with 18 minutes to go at Croke Park when Nicolas Anelka’s effort from the edge of the box deflected off Sean St Ledger and past Shay Given. France, then, left Dublin with a 1-0 win from the first leg of the playoff, and there was hardly a soul on earth who gave Ireland a chance of turning it around in Paris. They came mighty close, though, in what was their finest Irish performance in Giovanni Trapattoni’s reign, Robbie Keane levelling the tie on 31 minutes before William Gallas got the winner for the home side in extra time, Thierry Henry having a, eh, hand in the goal.

A 10-year gap since they last qualified for a major tournament all but ended in the first leg in Tallinn when Ireland cruised to a 4-0 win over Estonia, a Robbie Keane double, added to earlier goals from Keith Andrews and Jon Walters making the second leg something of a formality. And so it proved, Stephen Ward making it 5-0 on aggregate before the Estonians got themselves a consolation score. Giovanni Trapattoni had, then, ended the qualifying drought, Ireland sealing their place at Euro 2012, which was co-hosted by Poland and Ukraine.

The real hero of the first leg in Zenica was George Hamilton who was tasked with commentating on a game he could barely see thanks to heavy fog. Somewhere in the middle of the gloom, Robbie Brady gave Ireland the lead eight minutes from time, but Edin Dzeko levelled three minutes later to set up a nervy return leg. But it went smoothly enough for Martin O’Neill’s side, this time Jon Walters proving to be the hero, opening the scoring with a first-half penalty – a highly controversial one – before volleying home on 70 minutes. And with that Ireland’s place in Euro 2016 was sealed.

After a commendable scoreless draw in Copenhagen, things were looking mighty fine in Dublin when Shane Duffy headed home Robbie Brady’s free after just six minutes, Ireland’s first World Cup qualification in 16 years looking within reach. Thereafter, though, it turned in to a nightmare, largely thanks to a hat-trick from Christian Eriksen. It would have been a great deal worse only for some fine saves from Darren Randolph, but three Danish goals in the last half hour completed a miserable evening and ended hopes of a place in Russia 2018.

Emiliano Grillo storms into the lead in Mexico 08:36
Jim McGuinness: Cavan need illogical courage and variety to down the Dubs 07:00
Ireland retirement was ‘hardest decision’ for David McGoldrick 06:30
Matt Williams: Scrum stoppages turning rugby into a boring spectacle 06:30
Evergreen: Johnny Sexton the latest Ireland outhalf to keep on keeping on 06:00