Seven fresh cases come as a huge blow for club 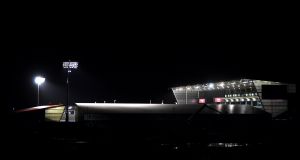 Sale’s postponed Premiership match against Worcester has been officially called off after the Sharks received a significant number of further positive Covid-19 tests on Wednesday morning.

The Sharks had pledged to forfeit the match, handing Worcester a 20-0 victory, in the event of any more positives and the club has stated that five more players and two members of staff have been infected, in addition to the 19 from last week’s round of testing.

Confusing matters, however, Premiership Rugby says that its review panel has taken the decision to cancel the match, rather than Sale forfeit, and that there were eight additional cases. Sale insist there were seven, as well as one damaged sample.

The upshot is that Worcester will not travel to Sale on Wednesday and that Bath will finish fourth and face a semi-final trip to Exeter on Saturday while Wasps will host Bristol in the other semi-final.

Sale said they were “devastated” at missing out on the playoffs and have always suspected that the outbreak was caused by a false negative test last week. They have strongly denied allegations that their players were partying in Manchester city centre after their Premiership Cup final win over Harlequins on September 21st.

A Sale statement read: “Although everyone at Sale Sharks is disappointed to see our campaign end in this manner, the club wholly understand that the welfare of players, staff and officials is the most important factor. Throughout the last six months, we have followed the official guidelines and protocols given to us by the RFU and Premiership Rugby, with rigorous testing regimes and safety measures in place to protect everyone connected to the game.

“Sale Sharks is confident the audit carried out by the RFU over the past few days will confirm this absolutely. Reports over the weekend suggesting our players acted irresponsibly by partying and socialising throughout Manchester after our Premiership Rugby Cup victory are completely inaccurate and untrue.”

Worcester welcomed the decision, having maintained strong reservations about playing the match. They questioned why 13 Sale players who had played against Northampton last week were due to play on Wednesday night when a number of Saints players were having to self-isolate. Those concerns became all the more serious when Northampton’s Piers Francis, who came off the bench against Sale last week, was forced to withdraw from the England squad having tested positive.

“This is the right outcome for the safety of all players, staff and officials involved although we do have sympathy for Sale that such an important match has been decided in this way,” read a Worcester statement.

“Sadly, we are playing rugby in the middle of a pandemic and in unprecedented circumstances. While it is desirable to retain the integrity of all competitions as much as possible, ultimately the health and safety of all involved has to be the absolute priority.”

Premiership Rugby has come under fire cancelling Northampton’s trip to Gloucester last Sunday, only to initially postpone Sale v Worcester. The organisation’s chief executive, Darren Childs, said: “I have spoken to Sale Sharks this morning and neither the club nor Premiership Rugby will take risks with people’s health. Together we won’t compromise our commitment that matches will only happen if it is safe to do so, therefore the game is off. Today’s decision demonstrates that commitment.

“We stated there was no room in the calendar for matches to be postponed but last weekend the health of everyone involved took precedent to ensure the Sale Sharks squad could be tested again, following the initial positive tests. Those concerns were proved today when we saw an additional eight positive tests. People fight hard for points in Gallagher Premiership Rugby, and for a place in the semi-final but everyone agrees this has to take second place to people’s health and well-being.”

Meanwhile, the RFU is yet to complete its investigation into the outbreak at Sale but expressed its concern about the situation. “The RFU is undertaking a full and thorough investigation and is working closely with Public Health England,” read a statement. “A summary of findings will be published in due course and we will consider if there are any learnings for all clubs.

“The RFU has concerns about how this situation has developed and will be making recommendations to PRL and the PGB to avoid future uncertainty for clubs and players as well as protecting the reputation of the game.” – Guardian