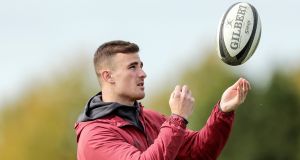 All has changed, changed utterly since Ireland’s 2020 Six Nations was unceremoniously interrupted last March and this is liable to be reflected in the squad Andy Farrell unveils this morning for the rearranged games at home to Italy on Saturday fortnight and away to France a week later.

Injuries and lack of game time will conceivably rule out at least seven players from the original 35-man squad which Farrell named prior to the opening game against Scotland.

Into this category fall Will Addison, Dave Kearney, Billy Burns, Dave Kilcoyne, Tadhg Furlong, Tom O’Toole and now the unfortunate Max Deegan who, it is feared, damaged his anterior cruciate ligament as a replacement against the Dragons last Friday.

This noticeably reduces Farrell’s options in the back three and at prop. Taking that January squad as a template, akin to the situation in Leinster, injuries could open the door for Hugo Keenan, who has impressed at both wing and fullback, not least as there’s also concern about Keith Earls, who is rehabbing a back injury.

Munster’s Shane Daly is thus also in the frame and although James Lowe doesn’t become eligible until the Autumn Nations Cup, it would make sense to have him involved in the wider training squad.

The established midfield quartet are all in good working order, while Burns’s calf injury opens a door among the outhalves for Jack Carty, with Harry Byrne – one of the four development players added onto the squad in February – likely to feature in some capacity, possibly the full squad.

The scrumhalves are all still standing too but form makes this position potentially subject to change. Jamison Gibson-Park is the form ‘9’ and Kieran Marmion has also looked back to his best, whereas Luke McGrath and John Cooney have dipped. The young Munster scrumhalf Craig Casey could also be involved in some shape.

The hookers may well remain unchanged, not least as Niall Scannell has been sidelined for a couple of months with a neck injury sustained in training last week, whereas three of the six props named in February are sidelined. This could thus create space for John Ryan, Finlay Bealham and the uncapped Ed Byrne.

In the secondrow, the fit-again Tadhg Beirne and the upwardly mobile Ryan Baird are putting pressure on Devin Toner while, as with Beirne, Jack Conan is back in the backrow frame. Will Connors, named as one of the four development players in January, was subsequently added to the full squad and is thus likely to be included again.