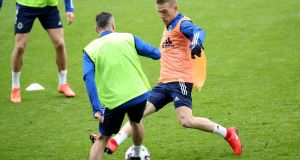 Steven Davis during a Northern Ireland training session at Windsor Park on Tuesday ahead of the Euro 2020 playoff against Bosnia and and Herzegovina on Thursday night. Photograph: William Cherry/Inpho/Presseye

Steven Davis has said Northern Ireland must draw on their “big game experience” to preserve hopes of reaching a second successive European Championship and mark his record-breaking 120th international cap in fitting style.

Ian Baraclough’s team face Bosnia and Herzegovina in Thursday’s playoff semi-final knowing a potential final against the Republic of Ireland or Slovakia awaits at Windsor Park next month.

Northern Ireland suffered a painful defeat in their last playoff appearance when an outrageous penalty decision sent Switzerland to the 2018 World Cup finals at their expense. But Davis believes that blow in 2017 can be turned to Northern Ireland’s advantage in Sarajevo.

The captain explained: “The Switzerland game was two legs and maybe sometimes you aren’t as aggressive as you should be in the first leg because you know there’s another game coming and another game to put it right.

“Even if you go back to the Euros and the opening game against Poland [in 2016] we felt a bit like that but we have that experience behind us now and a number of the boys have big game experience.

“We know how difficult it is to win away from home in international football but we can take a lot of confidence and belief from playing Bosnia before and we have managed some good results away from home in the past. We have to make sure we have no regrets. I have full belief we have the ability to progress in this tie.”

Bosnia have won the two previous encounters, however, although the Rangers’ midfielder insists there is foundation for his optimism.

“I know this will be my 120th game but I don’t remember too many games when we were as dominant as we were in the Bosnia home game in the Nations League, ” he said. “We controlled that game in many respects and in the away game we created a lot of chances too. But they also showed how ruthless they are, so we know it’s going to be a very difficult game.”

Davis will overtake Pat Jennings as the most capped player in Northern Ireland’s history and the achievement is not lost on the usually understated midfielder. “It is a massive milestone for me,” he admitted. “I’ve probably downplayed it a little in the past but that’s just in my nature and the way football is. You can’t look too far ahead.

“It does take a lot of hard work and sacrifice to get to this stage. I’ve never been to any of my three kids’ first day at school or anything like that because of the way international football falls – but it is an incredible achievement to get to this point and hopefully it’s a great game to mark the milestone.” – Guardian