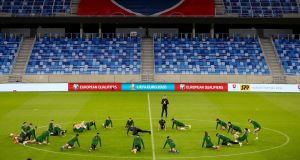 Most international managers get a little more opportunity to settle into the role but Stephen Kenny’s third match may well be remembered as one of those that defined his time in charge of the Irish team. If his side loses, that is. Win, and there will be an even more definitive test to be undertaken just a few weeks down the line.

The Dubliner has not quite had the start he would have wanted and might be forgiven for envying the likes of Jack Charlton, Mick McCarthy and Giovanni Trapattoni who had plenty of dress rehearsals before their first big day.

Kenny, on the other hand, was left with no option, he suggests, but to spread the Nations League game time around last month and settle for sizing up his options.

A draw and defeat on, he knows a good deal more about the challenge he has undertaken. The more critical issue, though, is whether his players are more attuned to just how it is he wants to tackle it.

The 48-year-old believes so. “We’re in a much better place than we were four weeks ago,” he said on Wednesday. “Much better. There were some things that we needed to improve on but we were able to analyse and assess and address them. After the things we’ve worked on, the players have a clearer idea [what is wanted of them].”

The list may well have been a long one given Ireland’s difficulties in both defence and attack last month. The change of emphasis was obvious but so were the areas in which some more work was badly needed. Ireland were certainly better at retaining the ball against Bulgaria and Finland than they have tended to be against comparable opposition but they were no more effective really when it came to posing an attacking threat from play.

Most alarmingly, perhaps, ahead of a game which a few of his predecessors might have been happier to battle through while looking to grab a goal against the run of play or, failing that, win on penalties, the team was more vulnerable than usual at the back where the high line employed left long-time asset Shane Duffy suddenly looking like quite a liability.

It is quite a lot for the new manager and coaches to address in just a couple of sessions on the training pitch but one player after another this week has insisted that they are on top of the plan as they prepare to face Slovakia and are in far better shape to implement it.

For his part, Kenny insists that the players are well prepared. “We have not been able to train with any real intensity but they have taken information on board quickly,” he says. “They are very receptive, you can see that. There is a good atmosphere and they are very determined.

“Slovakia themselves are quite possession-orientated but it’s our ambition to be geared towards trying to control games as well because that’s what I want the team to be based on. It will be interesting to see how it materialises.”

At the group stage of this competition last year, the Slovaks scored a few more goals than Ireland but conceded a few more too. “The games are quite open because they really go at you,” says the manager. “They are a good team but they give you opportunities as well.”

Whether Ireland can take them is the big question but, with David McGoldrick likely to replace Adam Idah up front, there will be more experience on show. Aaron Connolly looked lively in last month’s games but needs to be clinical.

It might take more than that though if the visitors are second best in midfield. Kenny suggests that he has great faith in James McCarthy and he could do with having it repaid, but it is far from clear that the Crystal Palace player has the full range of talents required to perform the role he is being handed.

Only Conor Hourihane produced the sort of passes required to set Ireland’s front three on their way against Bulgaria but the Corkman also produced the misplaced one that led to the home side’s goal.

Crucially, the message since has been that Kenny wants his players to be brave. That is absolutely key to the philosophy that earned him this job but it is also to be flung back in his face if things go poorly.

The Slovaks will, he says in any case, be “a step up” on Bulgaria and so Ireland will certainly have to be better. “One thing we want to carry is an attacking threat,” he acknowledges and while he would take a win of just about any type, he admits, he is clearly aiming higher.

Kenny has, at least, been the luckier of the two coaches in terms of player availability. Harry Arter is out but was not certain to play while his opposite number, Pavel Hapal, has had a nightmare build-up with news coming through on Wednesday that both Napoli’s €26 million midfielder Stanislav Lobotka and regular centre back Milan Skriniar of Inter Milan were both out due to coronavirus; Skriniar having contracted it and Lobotka stuck in Italy because of an outbreak at his club. Hapal must also cope without his first-choice goalkeeper and left back.

Lobotka’s loss is the biggest blow but Slovakia are still strong in midfield which is likely to be where the game is won and lost but Kenny will have been relieved to have learned of the 25 year-old’s absence yesterday. At this stage of the game, he has enough to be getting on with.