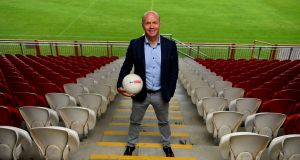 Peter Canavan has called for counties to be allowed increase the size of their panels in the event that players are unavailable due to coronavirus. Photograph: Brendan Moran/Sportsfile

With daily cases in the province among the highest in Europe, and Fermanagh the latest county to cease all GAA activity, the prospect of the Ulster football championship sticking to its pandemic-revised schedule is appearing increasingly slim.

Peter Canavan is hoping for the best and fearing for the worst, the former Tyrone All-Ireland winner nonetheless seeing both hope and reason why it should press on regardless: one necessary adjustment may be an increase in the permitted number on county panels.

“It is a concern, of course it is, but I still think we’ll have a championship,” said Canavan. “The Government want elite sport to go ahead, whether that’s rugby, soccer, Gaelic, and I know the GAA are pretty adamant and confident that we should go ahead with it. So for that reason I would be confident that, yes, we’ll definitely have it.

“County panels are going to be affected, it’s natural that players are either going to contract the Covid or in some cases be a close contact. I know there’s restrictions on numbers that county panels have, and I think the GAA’s going to have to look at that and increase their numbers so that counties aren’t in a position where they only have 17 or 18 players. But I still think that yes, we’ll definitely have a championship, it’ll definitely go ahead.”

Tyrone’s two-time All-Ireland winner, speaking at the launch of Sky’s championship coverage, also admitted the current situation in Fermanagh was another reminder of how quickly things can change. Following a spike in Covid-19 cases within the Ulster county, and a number of players within the Fermanagh senior football panel returning positive tests for the coronavirus, it was agreed to suspend all activity until further notice.

Fermanagh are set to face Down in the Ulster football championship quarter-final on November 8th at Brewster Park, while their final two rounds of the league are away to Clare on October 18th and at home to Laois the following weekend.

“If county panels are limited in terms of numbers, then in a case like that they’re going to be severely hit,” said Canavan. “I know up here that the GAA and the county finals have been getting a ‘quare’ bit of flack regarding the amount of coronavirus cases that have resulted on the back of that.

“It’s crazy, I know in most cases the universities are undertaking blended learning or remote learning, but there’s still one in particular [that] appears to be adamant and are sticking to face-to-face learning and there’s a lot of students going up to Belfast, staying up there and coming down at the weekends again.

“And the cases up around Belfast and the university area are very high so as well as the issues arising out of county finals, the issue of students up at university needs to be looked at as well and that’s out of the GAA’s hands, of course.

“I’m not too sure of the numbers, and so you could have five or six players out through injury, out through suspension. I think county managers are going to have to expect that. I know in Tyrone, maybe there was one or two players isolating. Obviously in Armagh there were five or six and they were forced to stop their training. Look, it’s far from ideal but with whatever players they [Fermanagh] have, I still expect that they’re going to be participating in the National League.”

The North’s Department of Health recorded 828 new cases of coronavirus in Northern Ireland in its daily bulletin issued on Wednesday afternoon, taking the number of cases to 16,187; in the past seven days, there have been 4,417 new cases of the virus in the North. The highest incidence continues to be in the Derry and Strabane council area where there were 637 cases in the past week. It is followed by the Newry, Mourne and Down area with 338 cases per 100,000 of population and Belfast with 318 cases per 100,000.

Meanwhile, Kieran Donaghy has cast some doubt over Dublin’s ability to win a sixth successive All-Ireland, the former All-Ireland winner with Kerry admitting they are still favourites, but that the straight knock-out makes them a little more vulnerable.

“I kind of felt that the Super 8s suited Dublin more than anybody,” he said. “They were guaranteed these three games, they were always going to win two of them, they were able to try a few fellas here and there, they were able to fine tune some tactical stuff – and they always knew that they were going to come into a semi-final on the back of three solid games against good-quality opposition.

“I think this year, they’re going to be probably coming cold out of Leinster and if someone can catch them in an All-Ireland semi-final on a wet day in an empty Croke Park, that’s probably the only way you see this Dublin team being beaten.”